by Emmy Griffiths Published on 27 March 2015 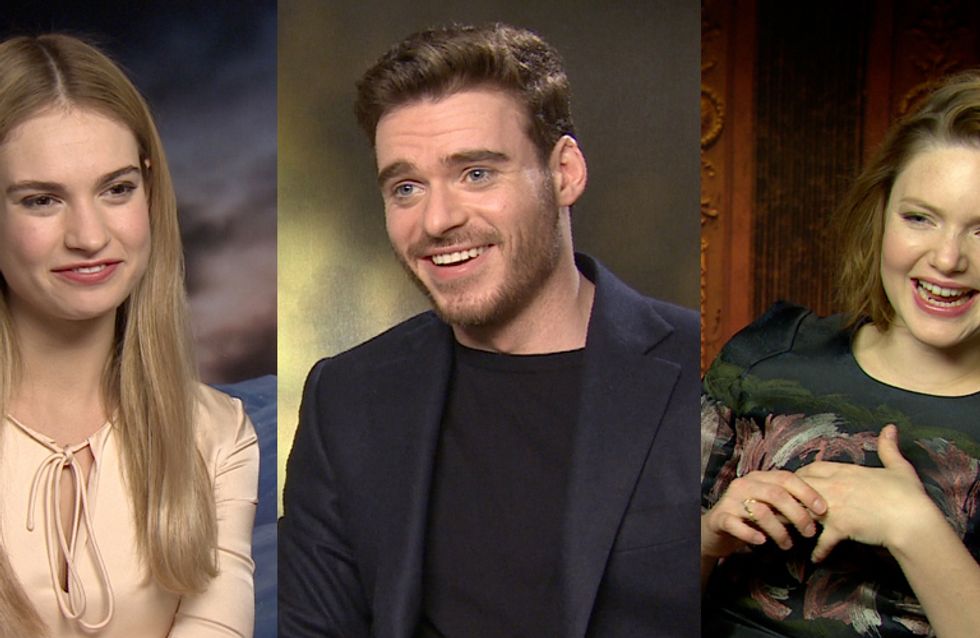 Cinderella is in cinemas now, so we chatted to the cast of Cinderella to give us the down low on their thoughts on the romance, the costumes, and their favourite emojis (you know, because these things are essential information)! Check out what we are Sofeminine learned from Cinderella (Lily James), Prince Charming (Richard Madden) and Stepsister Anastasia (Holliday Grainger)...

Holliday Grainger loves playing a brat (for a change)

"It was more a change because it was fun because they're silly...you can sort of make them as larger than life as you want...they're so preoccupied by how they look on the outside that it was fun to play with."

No one will play Monopoly with Richard

"I'm too competitive." It's official people. Richard is one of us.

Lily's gives us her mantra for life

Although she doesn't have a quote to live her life by, she loves her mother's advice of: "do as I say not as I do".

He likes the eyes...

Lily KIND OF believes in love at first sight

"The relationship between the Prince and her are really different they meet as equals they don't know who each other are and you see them build this bond, it's not just to do with the Prince falling in love with a damsel."

Richard feels naked without his beard

Apparently he hated the clean shaven look. Even though he looks AMAZING in Cinderella. #justsayin

Holliday thinks the stepsisters have the minds of toddlers

"There's something like an eight-year-old child of the stepsisters, they're like emotionally stunted and just didn't grow up past a certain age. Just like toddlers are in the centre of their own world and just can't understand the feelings of other people and have no compassion for other people."

Lily's was ALL about her ball gown

She said: "It's the best dress I've ever seen in my life," when asked what she preferred wearing (ball gown or flapper dress).

"It was hard to be in it all day because I could only sit on a stool that they would pop up and you'd have to lift the skirt to find my legs or they had this bean bag I'd lay back in so it wasn't easy."

"It was definitely a case of the madder the better...it can never be too garish for the sisters."

Richard had to dodge the gown

And Dodger from Oliver Twist. Because obviously.

"It takes ages to get to know someone." PREACH.

Holliday drew inspiration from The Exorcist when trying on the slipper

"[Kenneth Branaugh] just wanted to push it as far as possible and his direction to me was 'have you seen The Exorcist when her head turns around? I want you to do that.'"

Shield your ears, people of Scotland! Richard's all about London.

Need more reasons to see Cinderella (in cinemas now!)? Check out all the reasons you NEED to watch the movie and tweet us @sofeminineUK!