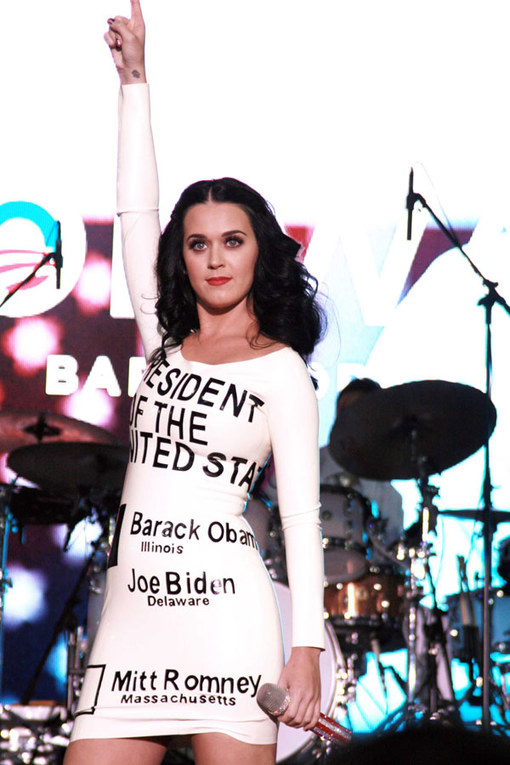 Replay
It's no surprise that stars use their celebrity platform to voice their opinions - and never is this more prevalent than during an election campaign.

With America set to decide who they want as their next president, US stars are doing all they can to campaign for their favourite candidate.

Katy Perry (that dress says it all) and Beyoncé Knowles are just two of the celebs working to re-elect Democrat Barack Obama, the country’s first black President who came to power in 2008.

Meanwhile, actor and director Clint Eastwood plus supermodel Cindy Crawford are Team Mitt Romney - a Republican who promises to turn around America’s economy.

Take a closer look at the stars supporting the two politicians - would they influence your vote?

©SIPA
AlbumCelebrity photo albums
You might also like
Heather Graham spellbound Barack
by the editorial team
Barack Obama Dancing With an Excited 106 Year Old At The White House Will Melt Your Heart
by Pascale Day
Bye Bye Barack! A Walk Down Memory Lane With The World's Favourite President
by Pascale Day
Barack Obama Said Some Lovely Things About Ellen DeGeneres And It's Got Us All Emotional
by Pascale Day
First Lady Michelle Obama Just Made Her Carpool Karaoke Debut And It Was So Freakin' Sassy
by Helen Turnbull
QUIZ: Which 'Friends' Supporting Character Are You?
by Emmy Griffiths
Celebrities Are Starting To Use Tinder
by Emmy Griffiths
Celebrities pay tribute to 'heroic' Nelson Mandela
by Alison Potter
Celebrities support Haiti relief efforts
by cheree
42 Celebrities And Their Adorable Pooches, Just Because
by Emmy Griffiths