Miguel's performance at last night's Billboard Music Awards certainly didn't go to plan. Check out the video of the singer landing on a fan's head in a stage jump that went drastically wrong...

Miguel injured one of his fans in a stunt that went dramatically wrong at last night's Billboard Awards.

The upcoming US singer was performing his track Adorn when he attempted a long jump over the crowd from the stage.

Unfortunately, the 27-year-old misjudged the distance and landed on his fan's head.

The female victim looked shocked after the incident and even appeared to fall to the floor.

Miguel finished his performance splayed on the ground.

Immediately after the accident, the singer emerged backstage with his fan, who was holding an ice pack on her arm.

The pair were then interviewed by Billboard's editorial director, Bill Werde.

An embarrassed Miguel said: "Well, I think it's kind of clear what happened.

"But I'm very happy to bring my new friend, Khyati, we just met. Unfortunately we did not meet under the best circumstances, but I think we're okay." 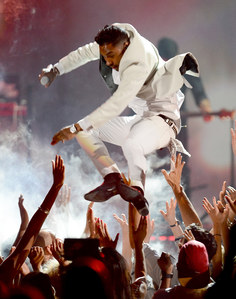 Though injured, Khyati seemed thrilled to be hanging backstage with Miguel.

The star added: "The crazy thing is, when you're performing and you're just kind of into it, you never know where it's gonna go and where you're gonna go with it, and how that might turn out.

"So this is one of the less favourable moments."

Miguel concluded that he just "got caught up in the moment".

GIFs and videos of the incident quickly went viral, with the singer's name quickly tending on Twitter.

One Twitter user wrote: "Miguel has a bright future in the WWE."

Another said: "I still find it hilarious Miguel tried to jump across the stage and missed. Then the crowd was like eeeeeeeeeeee." 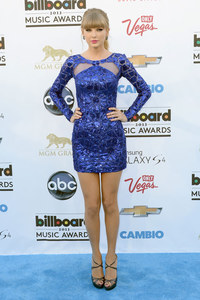 Esme Riley
…
AwardsBillboard Awards
For all the best videos, memes and shareable news!