No one likes to see their friend get back together with an ex they don't like and it seems that's exactly what Taylor Swift has to put up with. Justin Bieber and Selena Gomez seem to have patched things up and it looks like Taylor's not impressed.

Taylor Swift was caught pulling a face at Selena Gomez and Justin Bieber as they reunited backstage at last night's Billboard Awards.

Taylor, 23, and 20-year-old Selena are good friends and were sat next to one another during the show and it seems the Red singer is not so pleased with her younger pal's choice to get back together with her ex.

If there's anyone who won't put up with a bad boyfriend, we reckon it's I Knew You Were Trouble singer Taylor.

The blonde pop star can be seen sticking her tongue out in disgust as Selena hugs and kisses 19-year-old Justin backstage at the bash.

Selena had reportedly requested to be sat between Taylor and Justin during the ceremony, but in the end the Canadian bad boy was seated on the other side of the hall.

Justin and Selena were rumoured to be back together after a four-month break when they were caught kissing backstage during his tour in Norway.

Justin also posted a photo of the pair of them together, looking very close again.

The Billboard Awards were hosted in Las Vegas and the young couple were sure to take advantage of their mini break by arriving a few days early and enjoying a performance of the Cirque Du Soleil's Love show.

People Magazine reported that Justin spent the night "nuzzling" into his girlfriend while they snacked on chocolate.

What face would Taylor have pulled if she'd seen that?! 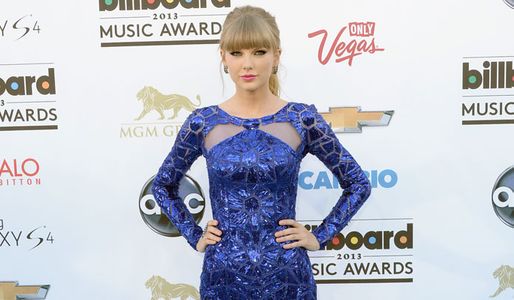