Britain's Got Talent is back and unlike The X Factor, show creator Simon Cowell is still on the judging panel and it looks like he gets a bit more than he bargained for when fellow judge David Walliams convinces him to join a dancer up on stage.

Anyone watching Britain's Got Talent tomorrow night will be treated to Simon Cowell getting his own personal lap dance from auditionee Keri - and David Walliams.

Keri arrives with a chair and uses it as the focus of her sexy dance routine, wearing a very skimpy outfit.

After the 43-year-old finishes her act, judge David suggests: "Wouldn’t it be great to see Simon sat on the chair and you doing the dancing? It would be wonderful to see that.”

The crowd gets behind the comedian and eventually the cheering and clapping is too much even for Simon and he lets David pull him out of his seat and onto the stage.

Simon then takes his place on the chair ready for a dance from the blonde audition.

The show boss tells Keri: “Let’s do it!”

But before she can get going, David involves himself in the action and makes it clear this is going to be a joint effort.

Fellow judges Amanda Holden and Alesha Dixon struggle with uncontrollable laughter as Freak Me by Another Level is played and Simon is trapped on the chair.

Watching from the side of the stage, host Ant McPartlin says: “For the first time in seven years we’ve got him on the stage!”

Delighted David says of his achievement: “I got Simon on the stage this year for the first time in the history of Simon Cowell being on television.

"I had to use all my weight, because I probably weigh about twice as much as he does, but I dragged him up!”

Britain's Got Talent will kicks off on Saturday 13th April on ITV at 7pm. 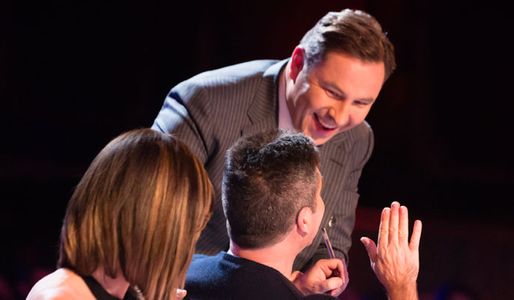 BGT 2013: David Walliams gets cheeky as Ant and Dec pinch his nipples

by the editorial team
+
All the news about David Walliams