Wembley Stadium yesterday played host to Capital FM's annual Summertime Ball. The event was hosted by Justin Timberlake and featured a host of performances from top pop stars. Check out the stars at the event...

New mum Rochelle Humes was absent from the Capital FM Summertime Ball yesterday, but there were still five people on stage when The Saturdays performed.

Pregnant Frankie Sandford's growing baby bump was on display in a little camisole top, which the 24-year-old teamed with a visible bright pink bra, black skinny jeans and heels.

Her bandmates opted for far more skimpy costumes, with Mollie King and Una Healy in tiny shorts and bustiers.

Vanessa White opted for purple trousers and a bustier.

Rochelle - who gave birth to daughter Alaia-Mai in May - was notably absent but was there in spirit.

Rochelle's JLS star hubby Marvin, who recently joined Capital FM as a DJ, spun the decks in front of the 80,000-strong crowd.

He also took time to pose with Rochelle's bandmates, before posting the photo to Twitter.

Other performers at the gig included The Wanted, who were joined by Nathan Sykes for the first time since he underwent emergency surgery on his vocal chords.

He tweeted after his comeback: "Thanks for all the love today. Really put a smile on my face…" 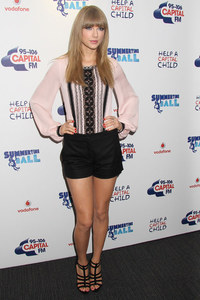 Esme Riley
…
PregnantThe Saturdays
From hair ideas to outifts, look no further for your daily inspiration