Downton Abbey fans are clamouring to know anything they can about the upcoming fourth season of the show. After Rob James-Collier appeared at a press event for the ITV drama with a shaved head, people have started talking - is this new look a hint at what's in store for his character? We all remember that police visit he had at the end of last series...

Rob James-Collier's new look has got people talking about a possible jail sentence for his character Thomas Barrow.

The 36-year-old appeared at a publicity event for Downton Abbey with a newly shaved head this week.

The buzz cut is a stark contrast to his usual slick raven hair.

The ex Coronation Street actor's Downton character Thomas Barrow was caught in the middle of a potential legal matter at the end of the third series.

A source told the Mirror: "Rob has either been sent to prison or has been written out of the show."

This is further backed up by Michelle Dockery revealing that the cast are “almost halfway” through filming the fourth season.

There is every chance the Downton butler could be sent to prison after he kissed the new footman James.

Set in the twenties, all homosexual acts were considered illegal and questions had already been brought to the police at the close of the last series.

Alternatively, Rob has also been rumoured to play the lead in a new BBC adaptation of Poldark.

The period series is set in late 18th Century Cornwall, and tells the story of dashing Captain Ross Poldark who returns to his estate from war only to discover it has gone to wreck and ruin.

We can totally see Rob in the role - from servant to captain!

Typically coy about the truth behind Rob's new buzz cut, a spokesperson for Downton refused to comment on storylines.

Fortunately, though, actress Joanne Froggatt - who plays Annna Bates - has spoken about what we can expect from the next series.

She revealed at the Glamour Awards that fans have quite a "rollercoaster" in store for them when the fourth series kicks off.

Need more Downton? Here are some surprising facts about the show... 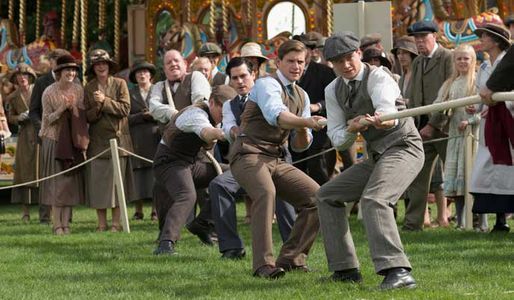