Is Chelsy Davy the reason behind Prince Harry's split from Cressida Bonas?

They've been on the rocks for some time now and it seems the Prince Harry/Cressida Bonas love story is over. After speculation they were heading for a split, it seems Cressida may have been the one to end it because of both the pressure of the royal spotlight and Harry's reported feelings for his ex Chelsy Davy.

Royal hunk Prince Harry is reportedly nursing a broken heart after splitting up with his girlfriend Cressida Bonas.

The couple have been on the rocks for a number of months and despite efforts to make it work they have apparently called it a day.

It appears the blonde beauty made the decision as the two of them were looking for different things - at 23 years old Cressida felt she was too young to settle down and have children, which is what Harry's looking for.

A source claimed to the Daily Star: "He and Cressida will stay friends but for the time being they feel they can’t commit the right level of time to a relationship."

Watching his brother William prepare for the arrival of his baby must be proving difficult for Harry now that he's a single man again.

The source added: “Deep down he is gutted. It is all Harry wants, to settle down and start a family.”

The Prince and Cressida both attended the wedding of mutual friend Thomas van Straubenzee to Lady Melissa Percy this weekend.

Though they were both invited, they apparently did not arrive together.

The couple had been struggling with the expectations placed on them with regards to getting serious and there were stories of big arguments between them.

The friend added: "She likes Harry, but is not the sort to be bothered about his title."

Reports would suggest there was another reason for their split - the "ghost of Chelsy".

Cressida was apparently "intimidated" by the 28-year-old's ex-girlfriend Chelsy Davy, who was also at this weekend's nuptials, but as a bridesmaid.

A source told MailOnline: "She is totally intimidated by Chelsy.

"She’s very tight with (the bride) Missy and in the wedding party, so it feels like she’s on Chelsy’s territory."

They went on to claim: "She knows Harry still carries a major torch for Chelsy - she’s always felt that there’s a 'ghost of Chelsy' in their relationship."

Chelsy is also newly single and the ex-couple - who dated on-off for years - are said to be back in touch. 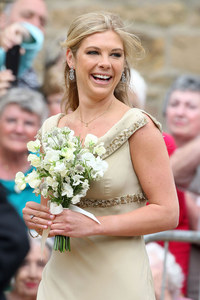 by the editorial team
+
All the news about Chelsy Davy