Jennifer Aniston is set to marry Justin Theroux, but it looks like it may pass by without much fuss as the actress is desperate to keep it low-key. She was said to have been so stressed by her first wedding to Brad Pitt that second time round she just wants to relax and enjoy a quiet day.

Don't expect Jennifer Aniston's wedding to Justin Theroux to be a big deal.

The actress' wedding planner Kevin Lee - who also organised her extravagant nuptials to Brad Pitt - has revealed that Jen and Justin's big day will be a quiet one.

Kevin told Grazia magazine: "They won't be blowing millions on an over-the-top wedding with hundreds of people there they barely know.

Jen and Brad wed on a Malibu estate in 2000 in front of 220 guests in a lavish sunset ceremony that was said to have cost around $1million.
​
The star-studded guest-list included Jen's Friends co-stars, Cameron Diaz, Ed Norton and Selma Hayek.

​Now planning her second wedding to her Wanderlust co-star Justin Theroux, 41, Jen is said to be keen to get hitched with less fuss.

Kevin continued: "She's so in love, she's found her soulmate and that's all that matters.
​
"It's about celebrating and spending time with their closest friends and family. There will be a meaningful ceremony, with heartfelt, loving vows and a wonderful meal.

It seems Jen, 44, has very different feelings to Brad on the matter though, as he’s currently planning his wedding to Angelina Jolie.

​Brad, 49, and 37-year-old Ange want to wed on their huge French Chateau Miraval estate and there's even been rumours of jumping ponies and elephants to fulfill their six kids' wishes.

​The pair are said to be planning their big day for May, when many of their friends will already be in France for the Cannes Film Festival.

​Kevin insists Jen and Justin, who got engaged in August last year, haven't yet set a wedding date - but their friends have been told to await an imminent call.

​Can we get an invite? 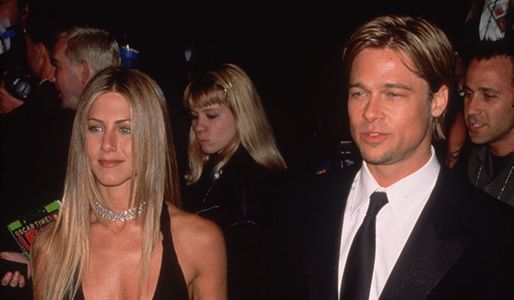