Life's not easy if you're Khloe Kardashian. Not only has she found herself at the centre of assault allegations, but her husband Lamar Odom has also faced serious media scrutiny because of his charity work. But she has had some good news - a judge has granted her request for a mental evaluation of Chantal Spears - the woman who sued her for the alleged assault.

​A mental evaluation of transgender woman Chantal Spears has been ordered by a judge in LA.

This follows model Chantal's claims that she was beaten up by Khloe Kardashian outside a Hollywood club back in 2009.

Khloe has vehemently denied all allegations, accusing Chantal - also known as Ronald - of making the whole thing up and as a result requested the mental evaluation be carried out.

The incident allegedly occurred after Chantal approached the couple and told Lamar - who was 30 at the time - that he was "too young to be married".

She went on to claim that in response Khloe, 28, struck her "in and about her body".

The story, which has been closely followed by TMZ, appears to show Chantal's claims are entirely false, as no arrests have been made.

Nonetheless, Chantal has also filed legal documents to say that she'll drop the case for a settlement fee of $150,000.

And the drama doesn't stop there for Khloe, as focus has also been on hubby Lamar since​ ESPN broadcast an investigation into the finances of Cathy Kids, his cancer charity organisation.

Lamar, 33, was faced with claims last week that none of the $2.2million raised by the charity has gone toward cancer-related funding since its foundation in 2004.

When the basketball star was asked for a comment by ESPN, he allegedly responded: "It's my money."

But Khloe has since taken to her blog to deny the claims and defend her man.

​She wrote: "No charitable funds were misused, and the IRS (Internal Revenue Service) has repeatedly given Cathy’s Kids a clean bill of health, confirming that there were no improprieties."

With regards to his comment to ESPN, Khloe said: "Lamar constituted more than 90% of the money raised by the foundation."

She followed the post with a tweet: "There are some finicky people in this world! People thrive off hate! I am fueled by LOVE and POSITIVITY. Peace to those who only know hate."

Oh the life of a Kardashian - not sure if we could handle it! 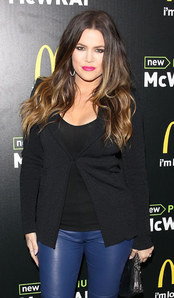