All women are different shapes and sizes, so it's no surprise that Kate Middleton and Kim Kardashian are sporting very different baby bumps. But this hasn't stopped people from criticising Kim's larger tummy after Kate stepped out looking rather tiny yesterday. We reckon people just need to leave them be!

Kim Kardashian and Kate Middleton are both six months pregnant with their first child.

And that's where the similarities end.

Duchess Kate stepped out in a tight designer dress on a charity visit to a deprived school in Manchester yesterday.

The 31-year-old's baby bump looked decidedly modest in her £1,065 floral Erdem dress, which she teamed with a pair of navy heels.

Kate met staff and pupils at The Willows Primary School, which is used as a backdrop for Channel 4 drama Shameless.

She also gave a speech about addiction to launch counselling programme M-PACT, which supports children whose parents are addicted to drugs or alcohol.

Kate's husband Prince William was absent from the royal visit but she proved she's more than capable of coping on her own.

After photos of Kate in her designer dress emerged, the media and Twitter users were quick to compare her to reality star Kim, who's been snapped in a string of tight outfits lately.

Kim - who's always had impressive curves, unlike super-slim Kate - is sporting a huge baby bump in comparison to the royal.

While Kate has decided to mostly cover up her tummy, 32-year-old Kim has been proudly showing hers off in often unflattering tops and dresses.

One Twitter user was quick to comment yesterday: "Kind of embarrassing that Kim Kardashian is due the same month as Kate Middleton but looks 50x fatter."

Another wrote: "Unlike Kim Kardashian, Kate Middleton is pulling off the pregnant fashion very well #Britishdoitbest."

And US gossip website TMZ published an article with a photo of Kate and her tiny baby bump alongside the headline: "Not All Famous Preggo Chicks Have To Be HUGE."

The article went on to post photos of Kim and Jessica Simpson, who both have huge tummies and are also due to give birth this summer.

But the article was quickly deemed "harsh" and some Twitter users were unhappy with the attention the girls are getting. 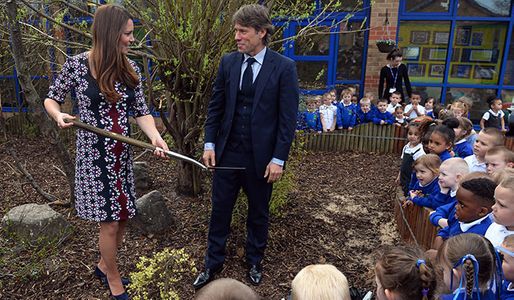