by Francesca Menato Published on 2 May 2013
© Getty

Katy Perry grew up in a strict religious household, so when she brought out her first hit single I Kissed A Girl, her parents were horrified. It seems even though it's five years later, her pop star career is no easier for them to take.

Katy Perry's preacher father has reportedly been touring America asking people to pray for the soul of his daughter, who he's branded a "devil child".

Keith Perry has told his congregations stories of times when he and his wife Mary have visited his daughter’s concerts and despaired over the misguided power she has over her multitudes of fans.

According to The Sun, Keith begs those present to "pray for Katy" and her sins.

During these religious talks, the 28-year-old's parents apparently show a video that declares her as a "devil child" in need of "healing". 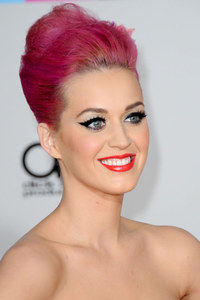 Speaking in Santa Fe Springs in California, Keith regaled of the struggle he faces being a preacher with such a child.

He said: “They ask how can I preach if I produce a girl who sang about kissing another girl?

“I was at a concert of Katy’s where there were 20,000. I’m watching this generation and they were going at it. It almost looked like church.

"I stood there and wept and kept on weeping and weeping. They’re loving and worshipping the wrong thing.”

At these meetings the couple have been taking donations, to aid their religious mission.

Katy has always been upfront about her parents' principles and how they differ from her own.

She's said: “People love the idea of a good girl gone bad, thinking that my parents were so strict and disowned me, but that actually wasn't the case.

"Even though they don't necessarily agree with some of the things I do, they love me as their daughter. That's always been their perspective.”

Wonder what her parents make of her dating history...​