Check out the latest snaps from behind the scenes at the MTV Movie Awards 2013. They give a great snapshot of what celebs are like when they don't necessarily know they're being filmed!

We thought we'd start off with a lovely picture of Liam Hemsworth looking very dapper backstage in the rehearsal room at the MTV Awards 2013.

​We've got to say Liam - the beard looks good. Damn you Miley!

Amanda Seyfried and Steve Carell took to the stage to present the award for best kiss. Amanda looked amazing in a print mini-dress as they gave the award to Bradley Cooper and Jennifer Lawrence. Jen was a no-show though so sadly there was no almost snog live on air.

Seth Rogen, Danny McBride and Zac Efron presented the award for Best Shirtless Performance to Taylor Lautner - but not without some rehearsal, as you can see below.

Seth gave the audience more than they bargained for as he dropped his trousers to reveal a lot of hair...we'd rather have seen Taylor take his top off again!

Kim Kardashian and her sister Kylie Jenner had been side by side all night with Kylie showing off her figure in white and Kim dressing up her bump in black. Here they are having a sneaky look through Kylie's phone backstage!

We spotted Quvenzhané Wallis doing some cheeky chair dancing to The Wanted during the in-show music. She was nominated for be breakthrough performance for Beasts Of The Southern Wild, but missed out to Rebel Wilson for Pitch Perfect.

Oh...and of course Flavor Flav was there! 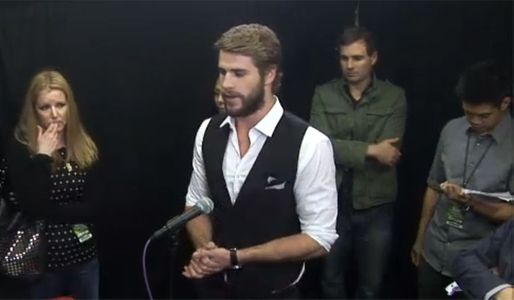