Young Royal Prince Harry is clearly just as popular in America as he is in the UK. Wills' younger brother arrived in the US yesterday and his appearance in Washington quickly attracted a crowd of admirers...

Prince Harry proved a huge hit when he kicked off his week-long US tour yesterday.

The 28-year-old Royal joined First Lady Michelle Obama at the White House on Thursday afternoon for a reception in honour of military mothers and their children.

Harry's appearance at the event was a surprise for the kids and their parents and he received a huge cheer when Michelle addressed his work in the army in her speech.

She told the guests: "It is an honour to welcome Prince Harry to the White House today.

"As you all may know, Prince Harry is a captain in the Army Air Corps in the British armed forces.

"We are absolutely thrilled he could be with us today. He just arrived in DC. He only has a limited time here.

"But when he heard about this tea and all of you, he wanted to be here to personally thank you for all your service."

Harry also attended an exhibition by the Halo Trust, an anti-landmine charity that was supported by his late mother Princess Diana.

The young Royal also met Senator John McCain at Capitol Hill, where his arrival was welcomed by a crowd of female admirers. 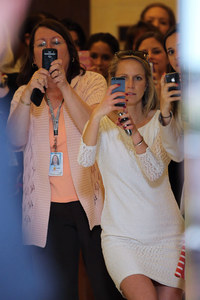 Members of staff gathered to get a look at the Prince but reportedly had to be ushered back inside by police.

One Twitter user posted before Harry's arrival: "If all the women on Capitol Hill were dust bunnies, #princeharry would be a Dyson Vacuum. Every woman is gone. Every. Single. One."

The gathered crowds were said to be like “giddy school girls", who were "swooning" over Harry.

Another Twitter user wrote: "I love how excited all the American women get when they see Prince Harry, clearly hoping to be his princess."

Fortunately for his adoring crowd, there were no signs of Harry's girlfriend Cressida Bonas.

The pair's relationship was confirmed earlier this year when they were snapped on a ski trip together - but Cressida has since taken a step back from the limelight.

Harry is said to be keen to settle down with Cressida after seeing his brother William marry Kate Middleton.

But for now it's business as usual for Harry, who will be away from his girlfriend for a week as he tours America.

"Prince Harry's tour will begin at Capitol Hill in Washington with a visit to @theHALOTrust - a landmine clearance charity #PrinceHarryUSA.

"During Prince Harry's USA visit, we will be using the hashtag #PrinceHarryUSA. If you get the chance to see The Prince do tweet at us!" 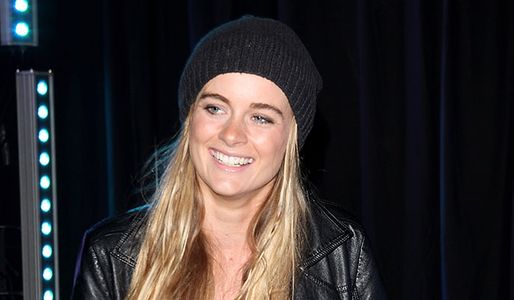