Ladies' man Russell Brand has apparently bagged himself a much younger lady - Chelsea Handler's stepdaughter Alessandra Balazs. Appreciating a good laugh must run in the family!

Just as Russell Brand has opened up on his divorce from Katy Perry, it's been claimed that he's now dating US chat show host Chelsea Handler's stepdaughter, Alessandra Balazs.

The 38-year-old comedian has apparently been seeing his younger lady - a hotel heiress - for "several months".

Alessandra's father is dating Chelsea Handler - the risqué host of the popular chat show Chelsea Lately - so it looks like a dirty sense of humour runs in the family.

The 23-year-old is reportedly quite "camera shy", hence the couple's success in keeping their budding romance under wraps.

An insider told Mail Online: "Russell and Alessandra have been quietly dating for months now and [have] even gone on holidays together, and, he took her to London with him.

"They really are so cute together - I wish she wasn't so camera shy.

"It is quite funny that a father and daughter are dating two comedians the same age."

The pair were first spotted together on California's Venice Beach in April.

And as Russell flew back to London last month, he brought his new lady with him.

The British funny man made sure to show his young love his favourite spots in the Capital. 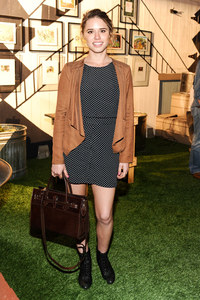 Alessandra posted a photo of Camden Lock to her Instagram page from her visit.

The youngster is the daughter of Katie Ford - the former CEO of Ford Models - but rather than following in her mother's footsteps she is working with her father.

A successful hotelier, he has brought her in to work on the Spin LA Ping-Pong club - a nightspot that opened in his hotel, the Standard, in December last year.

This is the first sign of a major relationship for the Booky Wook author since his split from Katy Perry, 28, at the end of 2011.

Russell has recently shared more details about his failed marriage.

He told Esquire mag: “When I'm in a relationship I'm diligently monogamous and stick to the principles agreed on within that relationship. You've got to, I think.

“But it's going to be hard if I go into a monogamous relationship.

“I live a life where I have a lot of freedom, so if I meet someone and I go, ‘Right let's be monogamous,’ that's a f*cking change.

We're hoping he and Alessandra have an understanding - however monogamous their relationship is.

He‘s had a bit more practice now at least!