The people behind the hit BBC drama Sherlock are desperately trying to keep their storylines under wraps but with filming under way on the streets of London it's proving difficult to keep the super fans from speculating.

Anyone anxious for spoilers about what's in store for their favourite TV detective may be disappointed as Sherlock's producer Sue Vertue issued a plea to fans not to post "pictures or spoilers or ideally our daily locations".

This comes after Sherlock fans posted photos and even outlined the exact action during filming in Bristol last month.​

And it seems show producers are keen for almost everyone to be left in the dark - even the man himself, actor Benedict Cumberbatch.

He spoke last month about the mystery of Sherlock's ability to escape the clutches of death at the end of series two.

He told the Radio Times: "[Writers] Mark [Gatiss] and Steven [Moffat] play their cards very close to their chests - I haven't even seen a script for the next series.

"I texted Mark the other day saying can I see one and he said not yet - so I'm as in the dark as everyone else is really."

Shooting alongside his o-nscreen sidekick, Martin Freemanm - who plays Doctor Watson - Benedict was spotted wearing the classic Sherlock costume of a grey deerstalker hat on the streets of London on Wednesday.

The 36-year-old actor was seen walking out of a door to a crowd of fake paparazzi with his co-star looking on.

It's believed the first episode of the latest series will be based on The Adventure Of The Empty House, one of Arthur Conan Doyle's many Sherlock Holmes stories.

The novel reveals how Sherlock is able to fake his own death.

So if you want an old school spoiler you can always read the book!

One mini spoiler that has been released is the name of the second episode - The Sign Of Three.

This has got the rumour mills turning, with people assuming it's a play on the original book title: The Sign Of Four.

If the storyline follows the title this may be the series in which Dr Watson finally finds love.

This seems likely as the show also announced the addition to cast of Amanda Abbington - Martin Freeman's real-life partner.

The writers’ official stance on Amanda's role is: one "that significantly impacts upon the lives of John and Sherlock”. 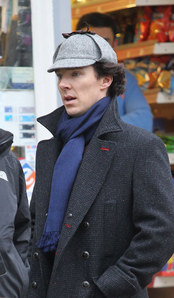