The Apprentice 2013: Former teacher Jaz Ampaw-Farr is first to be fired by Alan Sugar

And we're off! The Apprentice series 9 kicked off last night and we weren't disappointed by the drama that unfolded. Former teacher Jaz Ampaw-Farr was the first contestant to be sent home in a black cab by Alan Sugar after she boldly volunteered to lead the girls' team.

Jaz Ampaw-Farr became the first victim of The Apprentice 2013 when she was fired by Lord Alan Sugar last night.

The former teacher, who volunteered to be the girls' team leader, was accused of bad organisation in a task that saw contestants travel around London selling random items from a shipping container.

Business mogul Alan, 66, told her in the boardroom: "I think that, Jaz, there was terrible mayhem going on, bad organisation, fatal mistakes made, and I do believe that your biggest mistake was jumping in too quickly.

"On that basis Jaz, you're fired."

Jaz - who "loves being in charge and telling people what to do" - leaped at the chance to lead Team Evolve in the first task.

But Alan said: "To volunteer was very brave. Was it clever? I don't think so - certainly wasn't clever the speed you did it."

The girls sold £58 less merchandise than the boys' team, Endeavour, which was led by historian and property entrepreneur Jason Leech in the overnight task.

Team Evolve were quick to bicker, with Sophie Lau branding Jaz "patronising", while Luisa Zissman told Leah Totton: "No offence, you're a doctor."

On Team Endeavour, Jason's managerial skills got off to a slow start as the boys spent half the morning working out how to put batteries into the Chinese cat toys they'd been tasked with selling.

Other imported products they had to flog around the capital included crates of water, toilet roll and cat litter.

After selling the cat toys to a casino and finding out they'd scraped to victory, the boys were awarded with a special dinner cooked for them by one of Fortnum & Mason's top chefs.

On the girls' team, after they'd discussed their failure in the local cafe, Jaz chose to take team mates Sophie Lau and Uzma Yakoob into the boardroom to face Alan's wrath.

The mum-of-three - who now runs her own education company - revealed it was like being back at school again.

Jaz said: "When Lord Sugar comes into the boardroom you just go into 'I’m in sixth form again and this is my headteacher and I’m in massive trouble'-mode.

"There’s a kind of fear factor too, it is very daunting. I was at secondary school again and Lord Sugar was the headmaster and he was not happy with me."

This year's line up of contestants is particularly glamorous and 42-year-old Jaz - who was the oldest hopeful - admitted she didn't feel like she fitted in.

She said: "I remember standing in reception as people were coming in and thinking, 'Oh please don’t let me be the fattest here. I can’t believe it!' Because everyone was so thin and glamorous.

"It’s not my world. All hair products and fake nails. It did seem that everyone is particularly glamorous.

"I’d just had a baby when I went in there, so I was still breastfeeding." 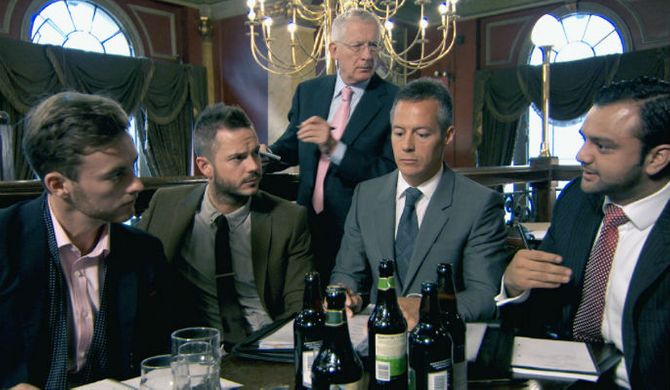 Courteney Cox and David Arquette
by the editorial team

9. The one you thought of before
by the editorial team