TV BAFTAs 2013: Made In Chelsea's Spencer Matthews and Lucy Watson make their debut as a couple

Things between Spencer Matthews and Lucy Watson have been hotting up on the show and it seems they've chosen tonight's BAFTA TV Awards to show off their new couple status.

Made In Chelsea's Spencer Matthews and Lucy Watson have arrived arm in arm on the red carpet at the BAFTA Television Awards.

​There has been growing speculation over the pair's relationship status since they were shown out on a date on the most recent episode of the show.

​If their red carpet body language is anything to go by, the date went very well! 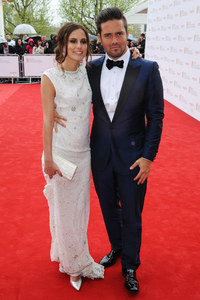 ​The pair were also recently spotted getting cosy during filming for the new series, as well as sharing a taxi together after the scenes were finished.

​They have remained tight-lipped on their relationship up until this point, but it looks pretty obvious that there's something going on.

​How notorious cheat Spencer has managed to convince another girl to be with him after his split from Louise Thompson is a mystery, but we're guessing the all expenses paid trip to Paris may have sweetened the deal.

​We'll see how that French holiday went on tomorrow's episode of MIC, but our guess is it was a success.

​Made In Chelsea is nominated in the category Reality And Constructed Factual at tonight's awards bash.

The E4 Show is up against The Audience, I'm a Celebrity...Get Me Out Of Here! and The Young Apprentice.

​We know who gets our vote!

​Lucy took to Twitter earlier this evening to post about the BAFTAs, but she didn't make any reference to her controversial arm candy.

​She said: "#BAFTAs tonight! #madeinchelsea is nominated for an award, fingers crossed we bring it home people."

​Spencer also tweeted: "All sorted with my BAFTA attire for the evening... Cheers @Casey_Paul #DIOR #GoBig."

​To be honest, we don't really care what brand of suit Spencer's wearing - what we really want to see is whether or not Andy Jordan and Louise turn up arm in arm too!