Zayn Malik fans, look away now! The One Direction singer has proved his devotion to girlfriend Perrie Edwards by getting her face tattooed onto his arm. We wish we were joking...

Just when we thought One Direction's tattoo collection couldn't get any more ridiculous, it seems Zayn Malik has proved us wrong.

The 20-year-old - who's no stranger to a tattoo parlour - has reportedly had his girlfriend Perrie Edwards’ face inked onto his arm.

Zayn has proved he's serious about the Little Mix singer after he apparently doodled his own image of Perrie, 19, and took it for the artist to copy.

According to TMZ, 1D - who are currently on the North American leg of their Take Me Home tour - were on a night out in Maryland when they had an urge for some junk food and new body art.

The inking on Zayn's upper arm is a cartoon-style image of a girl in a beanie hat and jacket - the same outfit Perrie has been photographed wearing.

Zayn's tattoo that looks like a cartoon Perrie! She's wearing the same hat, Zayn's jacket and a peace shirt! pic.twitter.com/6u2IR6NHGF

Zayn's decision to get a permanent reminder of Perrie comes just months after he was accused of cheating on her with an Australian stripper.

Courtney Webb snapped Zayn in bed after her alleged night with him - but fortunately Perrie decided to forgive and forget.

Nonetheless, the pair are still so young and many One Direction fans on Twitter are furious about Zayn's new tattoo. 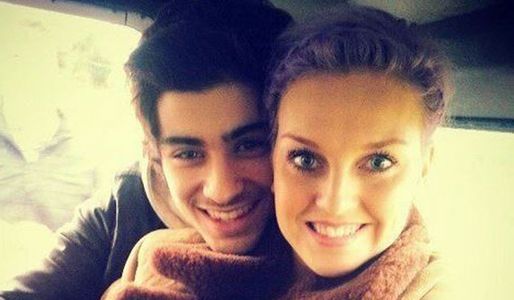 One wrote: "Zayn malik got a tattoo of perrie on his arm. yh ok good luck when yous break up, enjoy that constant reminder over thur."

Another posted: "ZAYN MALIK GOT A TATTOO OF HIS GF PERRIE ON HIS ARM LIKE WTF WHO DOES THAT."

And a third added: "Gonna be so awkward when @ZaynMalik and @LittleMixOffic's Perrie break up.and by the way the tattoo is 100 times hotter version of Perrie

On the other hand, there are a few Directioners who respect his decision.

One tweeted: "What's so wrong about zayn getting a tattoo of perrie? They're happy together. @zaynmalik is happy? What else do you guys want? #Zerrie ♥."

And another wrote: "Why is everyone hating on @zaynmalik tattoo i think its cute for him to get a tattoo of perrie shes amazing true fans are proud fans #nohate."

Zayn and Louis in the tattoo shop in Maryland #8 - pic.twitter.com/DBE5ZzDwcy