Can Children See Ghosts? What Parents Need To Know

An imaginary friend or a visitor from beyond the grave? You decide.

When I watch the flick as an adult ​it gets me thinking about what kids are actually capable of seeing. Mums - have you ever walked in on your kid speaking animatedly to an imaginary friend? Every parent has at some point. It's a pretty normal part of growing up that indicates a child is tapped into their imaginative thinking. In fact, as a parent, you WANT your children to think creatively and it's always an encouraging sign of their development to listen to them describe what their unseen pals look like and say.

As we now know, children tend to break up with the friends in their head after a certain age. However, there are some theories floating out there that insist that those imaginary friends your little one's been playing with could be visiting ghosts....

If you think your child can see ghosts it can be pretty concerning which is why we've found some of the most popular theories about this phenomenon and some advice about how to handle your child's spooky stories.

So can children actually see ghosts? Well, here's a round up of the main theories floating around out there...

Some people believe that we're ALL born with the ability to connect with the other side. Why? Because we haven't been conditioned to ignore what society deems impossible.

The result of this innate paranormal ability is that young kids allow themselves to "see" things that adults might miss. Sadly, as we grow up and become more cynical and disbelieving of things unknown, that ability disappears.

Here's a biological theory that's actually quite convincing! Adult humans can only see 400nm - 700 nm on the electromagnetic spectrum. UVA light falls just below visible light at 400 – 315 nm. Infrared light falls just above at 750nm – 1mm. So in layman's terms that means that what you are able to see of this world is quite limited - there are a lot of things happening just outside your vision that you'll never witness.

Ok, so here's where things get interesting. Young kids can see things at 380nm, putting them squarely in the UV range. When you consider the fact that several paranormal experts believe ghosts like to hang out in the UV and infrared ranges so that we humans can't detect them, things get a little spooky. Next time you get annoyed at your child for zoning out and staring into space, consider the possiblity that they're really staring at a spirit!

Young babies often fixate on a point. Mothers might catch their newborns smiling happily at something interesting in the distance.

Well, one theory argues that since young babies only left the spirit world weeks before, they're naturally more attuned to seeing ghostly visitors cross into their new world. In the video below, a child is happily chatting away when suddenly her eyes open wide, she sits back, and stares up at something that obviously surprised her (0:50). It's a chilling moment and the girl's rapt attention suggests that a spirit had caught her offguard.

What To Do If Your Child Sees Ghosts

Whatever you believe about ghostly spirits, if your child is adamant that they are seeing 'someone' or 'something' it's important to take them seriously.

As a gut reaction you might be tempted to wallpaper your house in religious paraphernalia the second your child says they can see a ghosts, and I don't blame you!

As a parent, the natural instinct to protect your baby kicks in when they confess to seeing dead people but that instinct can't be put into action. You see, a ghost isn't a live human being that you can kick in the face if you find it chillin' by your kid's bed. So finding out your child is dealing with visiting spirits often leaves parents feeling powerless because ghosts are something that you can't see and, as a result, can't control.

There is no indisputable proof that can end the debate on whether ghosts are real. You either believe it or you don't.

If you fall into the highly skeptical category then check out the creepy true stories below. The kids in them are being captivated by something. A ghost or a trick of the light? You decide! (Stories have been edited.) 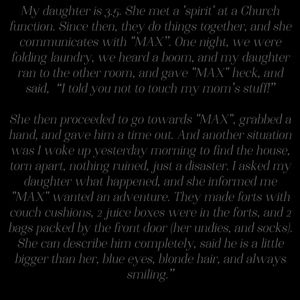 Are you convinced that children can see ghosts? Tweet us @sofeminineUK!

Carla Cain Walther
…
For all the best videos, memes and shareable news!

The cutest photos of the royal children

Everything we know about Harry and Meghan's baby so far

50 Of The Truest Ever Quotes About Mums

The Best Quotes of Dr. Seuss

The Ultimate 2015 Christmas Gift Guide For The Kids

Cute babies: Are these the cutest babies ever?