14 Creepy Cocktails You Have To Make This Halloween

by the editorial team Published on 29 October 2015 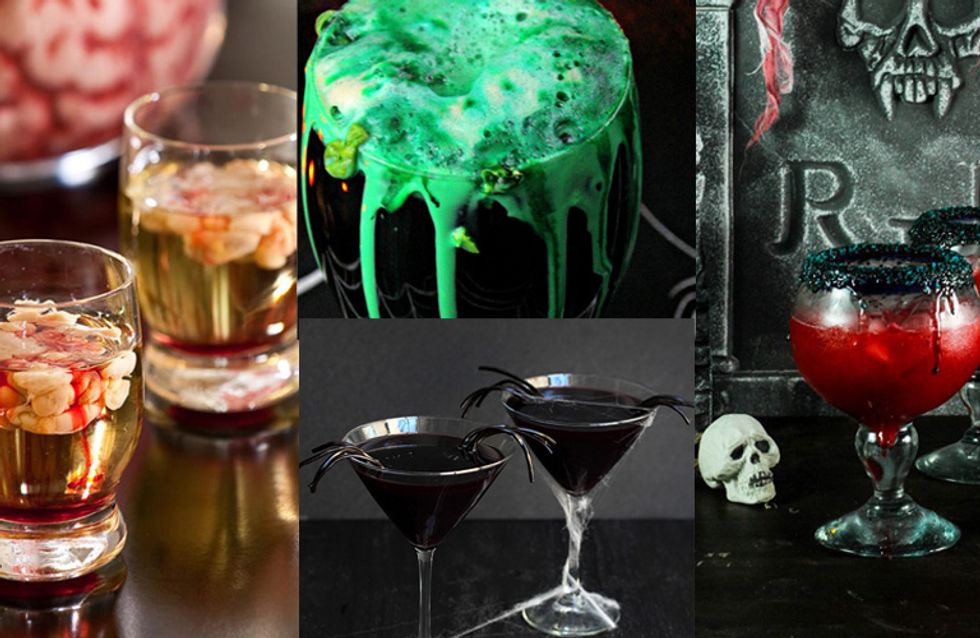 It's Halloween, the perfect excuse to scare the sh*t out of people and get drunk all at the same time. So we've put together 13 cocktails that will do just that. AKA we've just created the best Halloween party for you...aren't we just THE BEST.

It sure ain't pretty but it's halloween after all. Mixing lime juice with Irish cream causes the cream to curdle, creating a brain like look in a shot. YUM right?

See, the beauty of the Darker Storm cocktail is what's in it. This black magic is created using 50ml of Captain Morgan Black, 20ml lime juice and 10ml caramel syrup topped with ginger beer and a splash of bitters. But what really creates the black magic of this drink is a few drops of squid ink. Sounds dubious, tastes delicious - exactly what you want from a halloween cocktail.

A shot of blood anyone? The deep red colour of Bloody Mary's make them the ideal drink for Halloween. Serve it in a test tube to really amp up the creepy factor.

Blueberry pomegranate juice shaken with black vodka and Jägermeister then garnished with black widow “legs” aka liquorice. Horrifying yet oddly delicious all at the one time.

Here's how to make it.

The only poison in this drink is tequila, which is probably worst than anything the evil queen had TBF.

Check out the recipe.

'Blood' and tequila. Kind of sounds like the end of the night already...

Beer mixed with snot and green peas. Sounds DISGUSTING but is pretty good.

CSI in a glass.

Here's how to make it.

Seriously just looking at this eerie drink is enough to give you the creeps.

Everyone will be under your spell with this cocktail. Or under the table at least...

This is what you get when you go round kissing vampires. The cocktail is a yummy mix of mango vodka and coconut rum.

Check out the recipe.

Make of potion of vodka, lemon juice and lavender.

Will you be making these cocktails? Tweet us @SofeminineUK

​25 Halloween Costumes For Twins That Prove Spooky Can Be Cute