The Craziest Moments Ever To Happen In Hollyoaks

by Emmy Griffiths Published on 29 January 2014 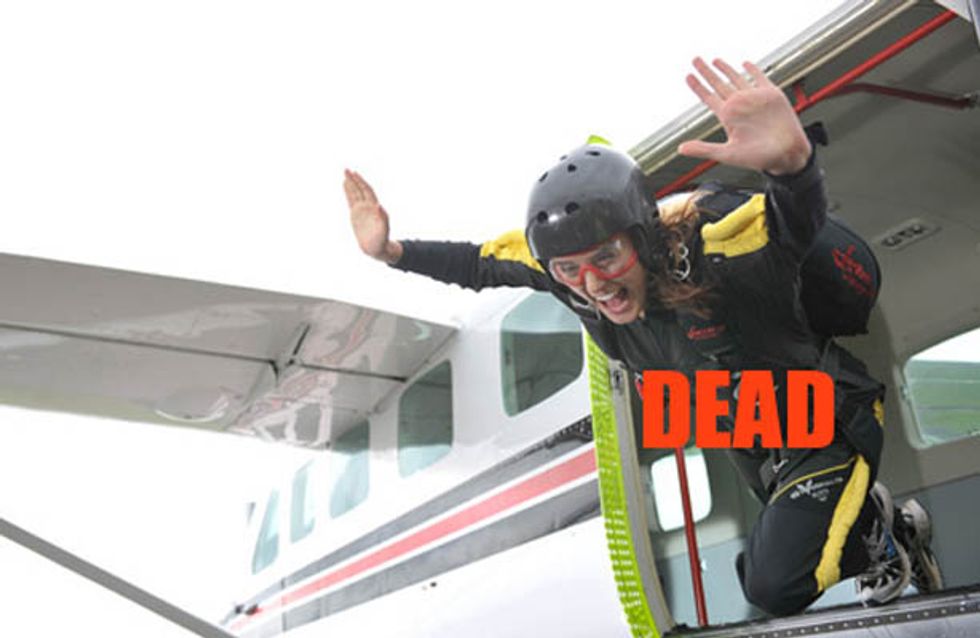 Hollyoaks is a mixture of teen drama and soap opera, which is obviously the perfect recipe for unbelievable hyperbolic drama, outrageously over the top storylines, and So. Many. Suspicious. Deaths. But there are some storylines that go above and beyond the dramatic. Some that beggar belief. So here are the craziest storylines ever to hit that sleepy town in Liverpool...

Texas becomes Will’s carer after he is 'paralysed' in an accident. He guilt trips her into marrying him, but after revealing on their wedding day that he CAN WALK OMG he pushes Texas out of the window to her death whilst still clad in her wedding dress.

It was an oddly cinematic moment, but why can’t Hollyoaks ever just have a wedding that goes well?! This brings up promptly to our next mad moment…

2. A bus crashes into the wedding

On their way to a wedding in a mini bus, Maddie doesn’t see little Leah wander out into the road. She drastically swerves, hitting Ste instead before driving into the wedding venue. Rhys dies. Jono dies. Neil dies. Maddie dies.

This is why fans affectionately call the show Deadlyoaks.

3. Rhys and Beth were lovers…and siblings…

Rhys and Beth fell hopelessly in love before they found out they were actually half brother and sister. After avoiding each other for a while, they can’t resist and give in to their desires (blergh). It all comes out and the pair decide to flee Hollyoaks to be together!

This isn’t Game of Thrones! This is a town in Liverpool! Come on!

Newt’s old friend Eli arrives to Hollyoaks and Newt hides him in his bedroom. It turns out that Eli is a figment of Newt’s imagination. Yep, Hollyoaks A Beautiful Mind-ed us, and it was great.

Carmel is in prison after being mistaken for a prostitute when Bonnie Tyler appears to sing a duet with her. It’s absolutely crazy, and it sounds like the whole thing was done 'cause the producer was a huge fan.

Seriously, WHAT DID THIS ADD TO THE STORYLINE?!

7. Carmel decides to become a nun

After seeing visions of her dead husband Calvin, Carmel decides to begin training as a nun, but is quickly put off when she meets a handsome priest who is later arrested. These things happen. Oh yeah, her face was permanently scarred in a tanning booth accident too. Such is life in Hollyoaks.

There are so. Many. Explosions. Our personal favourite has to be the MASSACRE which killed off Callum, Jade, Ash and Doug.

In the same episode Claire Devine was killed off after she was hit by a car. Because even an explosion isn’t enough for an episode of Hollyoaks.

6. Everything that Niall did to the McQueens

Niall Rafferty was revealed to be the secret son of Myra who gave him up when she was 14. To exact revenge, Niall began to slowly tear down the McQueen family, ending in kidnapping every single one of them and holding them hostage in a church. It ends in Niall detonating explosives, obviously.

When in doubt: explosions.

A jealous Lydia tampers with Sarah’s parachute so she falls to her death instead of having a delightful sky diving time. This was absurd. ABSURD.

When Tom catches Sienna’s fake bump on camera, she panics and puts him in her mum’s cellar. He manages to escape during Sienna’s engagement party, where Nancy brings Tom in and reveals Sienna’s actions to everyone. It’s amazing.

11. Bombhead lived with a corpse and started hanging around with a ghost

Poor Bombhead pretended his mum was still alive, did her dry cleaning and cooked her meals…whilst her corpse chilled out on the sofa. Norman Bates anyone?! Things only got stranger when he began chilling out with the ghost of Mr C. Sorry, what are we even watching?!

Does anyone want to put a bet on for how many people will be murdered this year? Twenty? Fifty? The entire cast? Did your favourite crazy moment make the cut? Tweet us @sofeminineUK

by Emmy Griffiths
#Hollyoaks
For all the best videos, memes and shareable news!