by Alison Potter Published on 3 December 2013 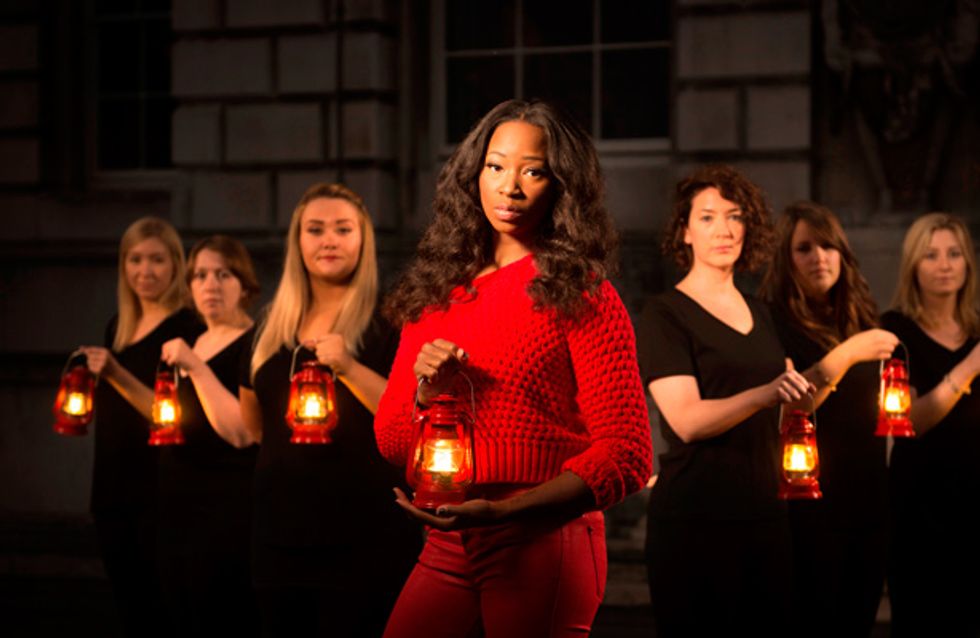 A shocking one in four women suffer from domestic abuse in the UK, which is a statistic that desperately needs changing. In light of this, beauty brand Avon UK and singer-songwriter Jamelia are uniting for a very exciting campaign called ‘Shine Light and Speak Out’, which they hope will increase public awareness and encourage more to be done to end violence against women.

Jamelia – who has just made her debut as a panellist on Loose Women – went back to her popstar roots last night to perform a very special concert at Somerset House.

In support of Avon’s ‘Shine Light and Speak Out’ campaign, and working alongside charity partners Women’s Aid and Refuge, the Superstar singer and domestic violence survivor is helping to draw attention to the issue of domestic abuse.

The campaign aims to educate people on how to #SeeTheSigns and encourage more women to speak up and talk about this taboo subject.

It’s a subject close to Jamelia’s heart, as she was in a violent and physically abusive relationship in the past, which she later documented in her cathartic hit song Thank You.

Speaking to the Guardian in 2011, the mum-of-two admitted: “I was beaten up almost every day and I honestly didn’t know that was not normal. I thought I don’t want this for [her daughter Teja], and left him.”

Domestic abuse – whether it’s physical, sexual, psychological or economic – is still a widespread problem that one in four women encounter at some point in their lives, and it kills up to two women every week in the UK.

Recent Avon Cosmetics research shows that a shocking 40 per cent of women know someone who has experienced domestic violence “for a fact”.

Despite this, a terrifying 33 percent of women admit they wouldn’t know where or how to seek support, and there appears to be a grave misunderstanding of what actually constitutes domestic violence.

A high number of women believe domestic abuse to be purely physical in nature; with nearly a third of women saying that a partner withholding all of a woman’s money or telling her what to wear wasn’t what they thought of as domestic abuse.

Speaking about the ‘Shine Light and Speak Out’ campaign, Jamelia said: “Domestic violence is still a daily occurrence for far too many women - and even children in the UK - but people are still reluctant to talk about it.

“We must do more! Only together can we change social attitudes towards domestic abuse and we must continue to campaign against it until we prevent it from happening completely.”

To be part of the fight against domestic abuse and to pledge support, those involved in the campaign are asking you to the share the twitter handle #SeeTheSigns and to not be afraid to speak out if you know someone is suffering at the hands of a partner.

“Women’s Aid know how vitally important it is for there to be widespread education about the complexities of domestic violence across the board, from teaching about healthy relationships in schools, to ensuring that everyone working in statutory services such as the police, the health service and the justice system understand the issue and know how to spot the signs and signpost to support”.

Sandra Horley, CBE, CEO of Refuge, adds: “Domestic violence is not a private matter, it is everybody’s responsibility and we must continue to speak out against it. Women and children have the right to live in safety, free from fear.”

If you know someone, a man or a woman, who is experiencing domestic violence find out more by visiting www.refuge.org.uk or www.womensaid.org.uk

If you are experiencing domestic violence and you are in immediate danger call 999; or call the Freephone 24 hour National Domestic Violence Helpline, run by Refuge and Women’s Aid, 0808 2000 247.

Remember you are not alone and there is support available.

What do you think about the ‘Shine Light and Speak Out’ campaign? Let us know by tweeting us at @sofeminineUK.

by Alison Potter
For all the best videos, memes and shareable news!