by Stephanie Ashley Published on 18 February 2014 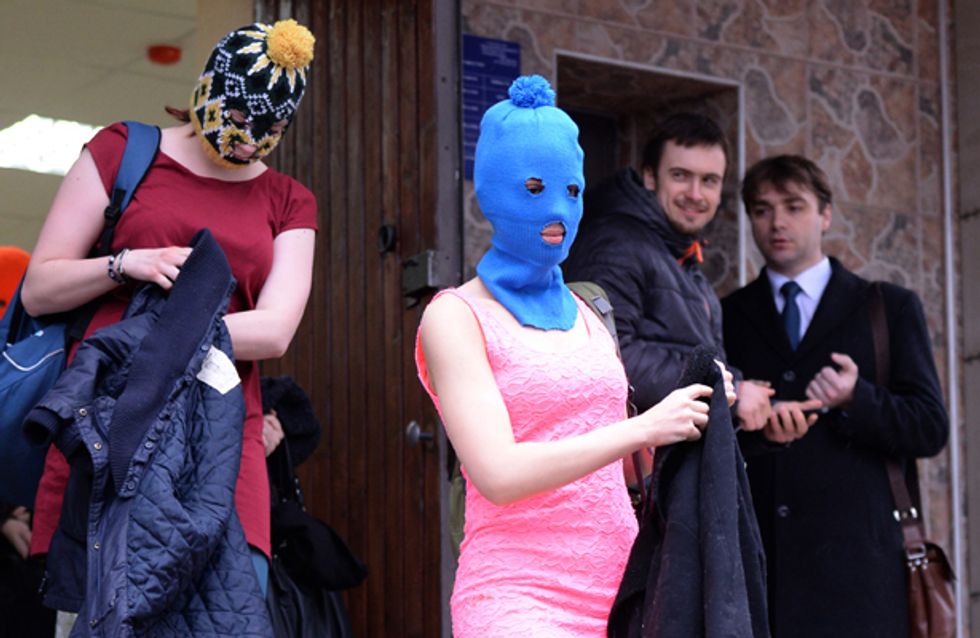 Two women were beaten in Sochi on Tuesday. No, we’re not talking about athletes, and this definitely didn’t happen in the 2014 Winter Olympic Games. Maria Alyokhina and Nadezhda Tolokonnikova, members of the infamous art-protest group Pussy Riot, were allegedly beaten and briefly jailed in relation to a theft at their hotel, all while the group was in the process of writing an anti-Putin song. Coincidence?

On Tuesday, two members of the popular art-protest group Pussy Riot and several others, including Semyon Siminov, a local activist with the nonprofit group Memorial, were detained by police and allegedly beaten in Sochi.

The feminist punk band Pussy Riot is known for its anti-government protests and guerrilla performances. The group formed in 2011 and has had a rush of anonymous members. Through their lyrics, Pussy Riot stands up for feminism and LGBT rights, while opposing the policies of Russian President Vladimir Putin.

One particular Pussy Riot protest, where they sang and prayed at Moscow’s main cathedral for the Virgin Mary to rid Russia of Putin, landed two members, Maria Alyokhina and Nadezhda Tolokonnikova, in a Russian jail for a sentence of two years. Maria and Nadezhda were released on December 23, 2013, following an amnesty agreement from Putin. The ladies say the act of amnesty was only meant to make Putin appear benevolent in the days before the Sochi Olympics.

Maria and Nadezhda, now arguably the two most famous members of Pussy Riot, were detained by police Tuesday while meeting with journalists in Sochi, right around the corner from the ongoing Winter Olympics. Petr Verzilov, Nadezhda’s husband and the group’s more or less publicity manager, spoke to journalists while the two women were being held.

“They were put to the floor and beaten and physical force was used to them when they refused to be questioned without the presence of their lawyer, who was on his way to the police department,” Petr told reporters.

Police say the two women were detained in relation to a theft at their hotel, but Petr has a different idea. Pussy Riot was in the process of working on a song called “Putin Will Teach You to Love the Motherland,” and Petr believes the police wished to interfere with that.

“The song takes several days to make,” he told reporters. “If the police had some questions about the song, then they should have officially said that. Instead, they are trying to charge Nadya, Masha and eight other members of the group with some sort of association with a theft at the hotel.”

These outspoken women did not let being detained by the police stop them from getting their message out. Maria and Nadezhda took to Twitter and gave an almost minute-by-minute account of what happened.

The Twitter chain began with Maria tweeting, “Detained in the center of Sochi on charges of felony.” She then proceeded to tweet images of her and Nadezhda being carted away in a police van.

Nadezhda joined in on Twitter to say, “Unbelievable lawlessness, even we are amazed. Beat on the floor of the department, in the Olympic capital!”

Local activist Semyon Siminov, who was detained alongside the Pussy Riot members, helped illustrate the scene by tweeting images of both women in what he and Maria call the “paddy wagon.”

All those detained by the police were released hours later. As members of Pussy Riot came out of the police station, several of them donned the colorful balaclavas that have become synonymous with the group and chanted a song about Putin, before being met with swarms of journalists.

Police said in a prepared statement upon their release, “A survey in connection with the theft at the Hotel Adler is completed, there is no claim against those questioned.”

After traveling around the world since December, Pussy Riot returned to Russia recently for what Nadezdha calls “pussy riot action.” On Twitter, she said, “We are in Sochi to hold a Pussy Riot action. The song is called, ‘Putin Will Teach You to Love the Motherland.’” As of Tuesday, they have not carried out any protests, and were apparently just walking the streets when they were taken by police.

Pussy Riot would have been, and still may be, joining countless individuals calling for political protests during the Sochi Olympics, particularly against the Russian law forbidding “propaganda” on nontraditional sexual relationships. So far, the games have not featured any demonstrations or protests.

While the Kremlin originally tried to ban all political protests in Sochi, Putin issued a decree in January saying demonstrations could take place only with government permission at sanctioned locations. Though local authorities say they have not received any applications for rallies, activists claim they have been pressured not to apply.

So far, the Olympic area of Sochi has remained relatively quiet, but what reaction will this recent move against Pussy Riot cause? It’s not clear what the group will do now after their release, but one thing is nearly certain. Their clash with the Putin administration is not over.

What kind of effect do you think this will have on the Sochi Olympics? Do you think these women were truly beaten and detained all because of a theft? Tweet us @sofeminineUK.