Although it was truly a fantastically breathtaking, fast-paced climax to an otherwise plodding season 5 (episodes 8 and 9 exempt), it still doesn't mean that I am happy right now. In fact, I feel dead inside by how Mother's Mercy went down. So without further ado, let's make like Sansa and Theon and plunge into the season finale of Game of Thrones, shall we?

Your daughter is dead. Your wife is dead (#ByeSelyse). Half of your men have abandoned you, and you are totally, totally unprepared. Stannis, you lost this war the moment you ignored Ser Davos’s recommendations. And you lost our support the moment you set everyone’s favourite Princess on fire.

Still, there is something still so heartbreaking about seeing Stannis’s dream of a destiny, a destiny that he has sacrificed everything for, die. Or maybe I'm just too sentimental because dammit he killed Shireen!

Sam, now is NOT the time to discuss your popped cherry

“Jon, I know that the White Walkers are coming and we're all probably going to die and there are enemies in the Watch everywhere we turn, but guess what I lost my virginity and please may I go FAR South to get Gilly away from my potentially raping bros and I suppose I could learn to be a Maester as well but just as long as I can still have sex.”

Brienne of Tarth is the reason I am here

Aside from the truly excruciating moment when Brienne JUST misses seeing Sansa’s emergency candlle (anyone else scream at their screens?), Brienne utterly slayed this episode and finally avenged Renly’s death by killing Stannis Baratheon.

I don’t know about you, but there must be a part of me that still cares about Stannis (after all, I did love the Mannis for the best part of four seasons), and it kind of broke my heart when he realised it was all over, although I'm also glad for obvious Shireen-based reasons. RIP Stannis and a teary well done to Brienne.

I’m so, so glad Theon woke up from that Reek nightmare just in time to shove that annoying Kennel master’s daughter to her death before potentially escaping with Sansa. We’re guessing that snow was soft as a bloomin’ pillow.

But where could they possibly go? They can’t go to Castle Black! Oh oh! Brienne! Go find Brienne!

This scene was as gruesome AF but we didn’t mind because Meryn Trant is such a paedophilic sadist who deserved to have his eyes gouged out. The only problem left is Arya’s relationship with the management at the House of Black and White. What even happened to her in those last few moments? They blinded her as a punishment?

Either way, that particularly juicy bit of revenge made Arya’s whole, kind of dull season 5 storyline worth it!

The Sand Snakes are the wor-OMG MYRCELLA!

Okay bye Dorne. Bye Sand Snakes you bloody weirdos who think you’re cool. I couldn’t have been more relieved that Jaime got Myrcella safely away, particularly when she admits she knows he is her father and they have the cutest father daughter moment ever before she begins to bleed.

Yes, Ellaria poisoned her with a deadly lipstick like we’re suddenly in some James Bond caper and we can only assume she dies in Jaime’s arms. Absolutely gutted.

JBear and Daario have gone on a bro quest to find Daenerys while Tyrion, Missandei and Grey Worm stick around in Meereen to keep things running smoothly. Does anyone else thing Tyrion might end up doing a much better job than Dany? Especially when he has Varys helping him out. We might not ever get an explanation as to where the hell he’s been the past 7+ episodes, but it’s fine. I’m just glad he’s back!

Dany is in the middle of nowhere chatting to Drogon like he gives a f*** when she suddenly gets surrounded by one huge Dothraki fleet. We know how these people operate by now, and suffice to say they won’t help her out just because she was once married to Khal Drogo.

Still, nice to see them again isn’t it? There is no word for ‘hey welcome back fellas!’ in Dothraki.

For saying the Sparrows are meant to be all about mercy, they didn’t back away from putting Cersei through THAT did they? That scene was awful to begin with before going on for way, way too long.

Thing is, that horrendously long, torturous walk took me from hating on Cersei to feeling desperately sorry for her and wanting Qhorin’s Frankenstein Mountain to avenge her the moment she washes off all of that tomato juice and gets her hair fashioned into a neat pixie cut. What about you?

And now his watch has ended

I’m done. I am dead inside. I have the insides of a literal white walker. That little sh*t Olly just went a KILLED probably the most essential character of the series (along with Daenerys), Jon Snow and I am DONE with this show. Didn't I say he was NOT to be trusted?! It's a good thing GoT is over for now because I’m still not sure I’ll be ready to forgive by next April.

Some thoughts and questions

What are the Night's Watch going to do with Melisandre?

Oh Davos. His sweet, sweet face when he realised Shireen was dead. I can't even.

How is Dany going to get herself out of this one when her dragon is out of action?

Is Jaime going to turn that boat around and kill those stupid Sand Snakes and their mother?

How are anyone of us ever going to be okay again, like really? Tweet us your thoughts @sofeminineUK!

This was written by Emmy Griffiths. Chat to her about Game of Thrones @emmyfg!

Check out the images from the episode: 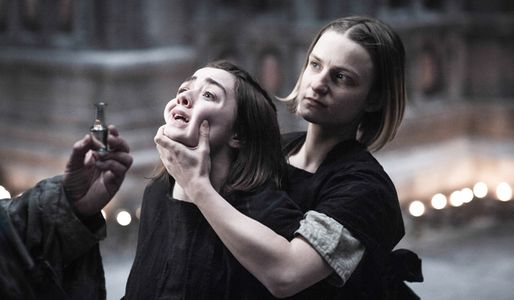