by Emmy Griffiths Published on 20 October 2014 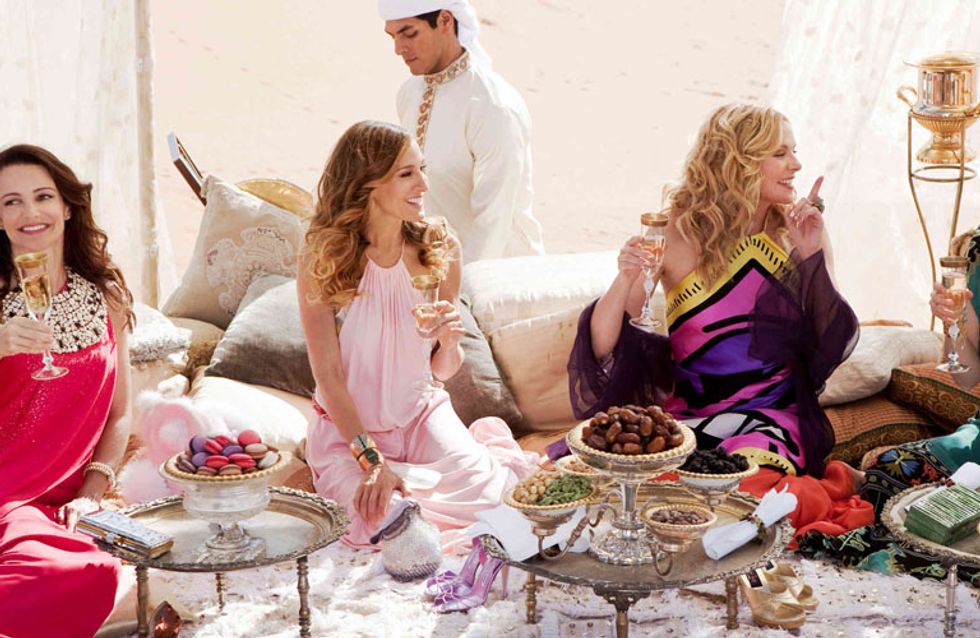 A third Sex And The City movie is rumoured (AGAIN) and we're not too sure how we feel about it. Sure, the show has had some amazing moments that truly celebrate what it’s like to be a modern day woman. Our favourite four friends have chosen their careers over relationships, their own happiness over their man’s, and have dealt with every kind of dating challenge, but what about the slightly stickier moments? Here’s when we think feminism in SATC took a downward turn…

Just in general, the women are OBSESSED with men

Obviously Carrie's Sex and the City column needs to come from experience - but all this show EVER talks about is dating. Would it even pass the Bechdel test, ever? We're thinking actually probably not...

Not just your average guy mind you, but super human hot, super rich, well-endowed men with no odd quirks, habits or sexual leanings.

If their potential suitors did not tick all the above boxes they were deemed unsuitable and picked apart at length (usually over Cosmopolitans). Until Charlotte broke all the rules by getting close with Harry of course (ok he is at least rich). But even then she was well aware of the differences between them, leading to their temporary break up.

So despite being hurt horribly by the same guys over and over again, they just go back.

Big makes Carrie feel utterly unimportant for the best part of five seasons, Carrie STILL gets back with the men who broke up then got back together with her more times than even Ross and Rachel...

It kind of gives the impression women only care about men and shopping.

They blame themselves unfairly when relationships go down the pan.

The subplot of Miranda's relationship with Steve in the Sex and the City movie was this: he cheated, and she could only forgive him when she realised that she had stopped taking care of herself and let the fire go out of their marriage. Erm...

Of course, they also need to be ‘rescued’.

When Carrie and her Russian lover to go France, she ends up on her knees picking up diamonds then bursting into tears as Big bursts through the doors looking for her. Ugh, thank God you're here Big. Because it definitely wouldn't have been SO much better if any of the girls came to help instead. Or, you know, Carrie just booked a flight home.

Not to mention stick with miserable marriages.

When Trey and Charlotte kept their unhappy marriage going, even posing together for a photo shoot as Carrie's voiceover said: "But all over America, little girls in their mothers pearls saw the picture and thought: 'that's what I want'", we couldn't help but involuntarily shudder.

Remember when Berger broke up with Carrie on a post-it, pretty much because she suggested the character in his book shouldn't be wearing a scrunchie? Yeah...that man was just one walking talking lack of self-worth.

Carrie. Stop doing a Bella from Twilight and cheer da fuq up.

We're not saying the show didn't have it's AMAZING feminist moments though. Here are our top 5 favourites...

Samantha breaks up with Smith

When Samantha's life becomes increasingly about her beautiful boyfriend Smith, she decides enough is enough, telling him: "I love you, but I love me more."

Charlotte and Miranda discuss how difficult motherhood is

Charlotte falls in love with Harry

Charlotte chose Harry as her lawyer as he was a hairy, sweaty bald man, who ended up being the love of her life.

Samantha breaks up with Richard

Samantha breaks off her engagement with Richard after he cheats on her and she realises she can't trust him anymore.

In an episode where Carrie loses her $600 shoes at a child's birthday party then totals up the thousands she has spent on other people's relationships and children, she wonders why they should be celebrated when she isn't, and we say fair enough!