by Emmy Griffiths Published on 19 December 2014 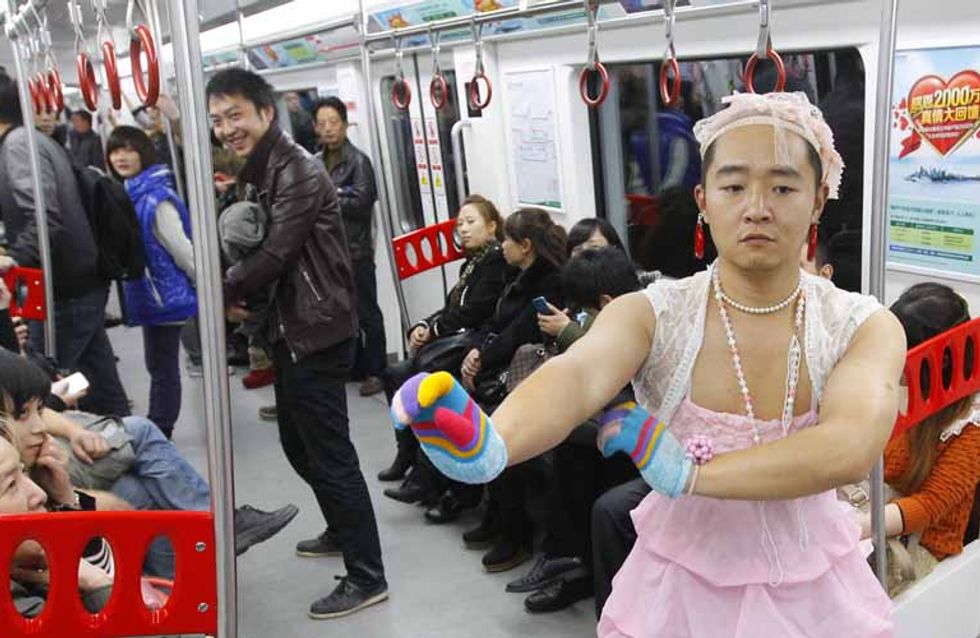 China. Home to truly stunning scenery, gorgeous traditions, and frankly unbelievably insane true stories. Here’s a look back at the craziest news from China in 2014…

Woman attempts to sell her daughter

To pay for an operation for her husband, a woman made some flyers and attempted to sell her 18-month-old on the street, despite her two other daughters begging her not to. Apparently her hubby wanted to sell her straight away after she was born.

A mobile phone lane is invented

To prevent annoyed pedestrians losing it at thoughtless technophobes glued to their phones, this city in China invented a phone lane so no one would have to look up from their technology. The bleak future is here everyone.

Ahhh dear. This guy tried to pass off a turtle by dressing it up as a burger to get onto a flight. When the security at the airport noticed the burgers odd shape (as in, it looked like a turtle), the man apparently replied: “There is no turtle in there, just a hamburger. There’s nothing special to see inside.” Well, we value his commitment to the completely stupid lie!

Zookeepers put dog in zoo and call it a lion

Yep, it’s just as stupid as it sounds. Zookeepers put a Tibetan mastiff in a zoo and called in an African lion. Believe it or not, people weren’t fooled.

Man dresses up in late wife’s bra on the bus

Apparently due to grief, this man was seen dressed in his late wife’s bra, top and pants whilst riding the bus. His relatives said:

Man is prevented from feeding himself to tigers

A man went to Chengdu zoo in China and lowered himself into the tiger enclosure, apparently presuming that the big cats wouldn’t be able to resist a bit of suicidal deliciousness. However, neither of the tigers seemed bothered by the man, with the male tiger only attacking him after he began pulling faces and drawing attention to himself. The tiger was sedated, and the man rescued.

To prove to men that childbirth is more painful than anything they will EVER experience, this facility invented a way to recreate labour pains on men, and these guys ACTUALLY VOLUNTEERED.

In the world’s creepiest move, this guy photoshopped himself into his girlfriend’s childhood photos. He said: "I want to send my love letter to little you, but without a time machine, the only thing I can do is come into your dream to meet you.” GAH.

Women knits jumper and hat from her own hair

GAHHHH! The woman from Chongqing spent 11 years saving up all of her hair, amassing over 110 thousand strands. She then preceded to knit a hat and jumper with the strands, which apparently she was planning on giving her husband. Ummm, happy anniversary, here’s the gift of CRAZY.

Man jumps out of window to prove he’s superman

How do you cover your tracks when you get drunk and decide to break into a house, ending up in a ten-year-olds room? This guy tried telling the little girl he was Superman, to which she countered that he’d better prove it or she’d scream. ​Cue the world’s most ridiculous liar/burglar jumping out of the fifth floor window to prove he could fly…which he obviously couldn’t. He suffered severe cuts and bruises for his efforts.

Artificial hymen kits will make you a virgin again

Want to convince your partner you’re a virgin? Simply buy the artificial hymen kit, which includes a packet or fake blood and a fake membrane to fool them! The site said: “Kiss your deep dark secret goodbye and marry in confidence! Have your first night back anytime!”

Nearby villagers reported suspicious looking luxurious cars driving in and out of the duck farm, and unfortunately since seeing such cars frequently a duck farm seemed quackers (WE COULDN’T RESIST), the police checked it out, discovered a drug bar and arrested 28 people.

Man tries to propose to girlfriend with drone, which she then attacks with a broom

A guy, and a hoard of amused passer-bys watched as he sent a drone with a lavish gift attached to it up to his girlfriend’s flat. Rather than grab the gift, the girl and her flatmate swatted it back with brooms and mops. The guy awkwardly collected his drone and left, presumably to rethink his romance strategy.

The passenger claimed he “just wanted fresh air” when he opened the door as the plane was about to take off. He claimed he didn’t realise it was dangerous, but HOW could he not have known?! SMH.

Women gets revenge on cheating husband and sister

A woman believed her husband and twin sister to be having an affair, followed them and caught them in the act in their car. When confronted the pair panicked and bolted from the car, only for the woman to lock the doors and leave them stranded in the buff in a car park.

Sperm donation just got that bit more appealing to men. What will they think of next?!

Apparently the bikinis (but for your FACE) were invented to protect from the sun, jellyfish and algae and although they look, well, absolutely freaking horrendous, the locals couldn’t care less. Su Ailing said: “Does it look like I care what people think? The tourists dress skimpy, but we locals know how to protect our skin.”

A businessman named An Yanshi is using panda poop to grow organic green tea, citing that it is “to convey to the people of the world the message of turning waste into something useful.” Apparently the tea is fragrant and smooth. Vom.

Which of these do you think it's the worst? Tweet at us! @sofeminineUK!