20 Celebrity Babies That Would Make The Perfect Match For Royal Baby No. 2 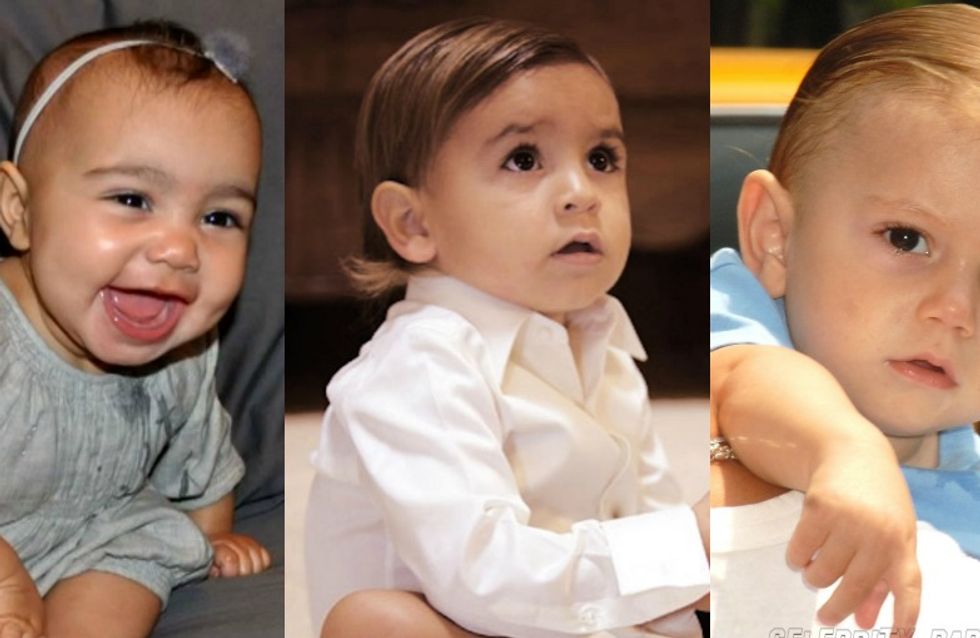 We know the anticipation of Will and Kate's second baby is probably killing you, why obsess about our own personal lives when we can obsess over Kate Middletons's? We're not sure if it's going to be a boy or a girl, but we decided to take it upon ourselves to do some matchmaking for the royal tot. For this highly scientific matchmaking process, we looked at in-law compatibility, genetic pedigree and ability to handle the spotlight when taking our matches into consideration.

If it's a girl

My ovaries simply cannot imagine how adorable a Kate Middleton Jr. would look because if they did, then they would probably explode. Her little dresses, pea coats and tiny little hats would make girls around the world want to stop their birth control ASAP. So who is worthy of the little Princess? Let's see...

You may remember Sarah Ferguson, the Duchess of York, who used to be married to Prince Andrew and is Prince William and Prince Harry's aunt. Well, Sarah Ferguson went by Fergie, so who better to woo and marry the future Lady of Cambridge than the son of another Fergie? Fergie and Josh Duhamel's one-year-old Axl Duhamel not only has a name meant for ruling, his love for soccer and impeccable looks would make him a terrific fit for Kate's little girl. Bonus: Josh Duhamel's strong hairline could help their grandchildren fight off Prince William's need for Rogaine.

He's the son of Victoria and David Beckham, which means he basically grew up as British royalty. His parents were at the wedding of Will and Kate, which also means there would be no awkward-getting-to-know-the-in-laws phase, and he grew up in the spotlight which is a necessary skillset for the future Prince. Although he would be 10 years her senior, if there is one thing we know to be true in this world, it's that males in the Beckham family only get better with age.

Alright, alright, alright. I can't imagine a better father in law than Matthew McCounaughey, you'll never have a dull moment at Thanksgiving with a dad like that around. And let's be honest, the royal family's gatherings look like they can be pretty stuffy, I think they need some Southern charm to shake things up in the castle. Also, Camila Alves' looks? You are fit for a straight jacket if you don't want that in your gene pool, so let's admit that two-year-old Livingston and his luscious locks would be a great fit for the future Princess.

Maybe it's the "King" in "Kingston," but Gavis Rossdale and Gwen Stefani's son seems like a totally suitable match for the for the Duchess' daughter. He has amazing fashion sense, Gwen could perform at the wedding and he's already half British. He's a perfect candidate, No Doubt about it.

Moses has the advantage of being the son of a musical prodigy and an uptight wannabe Brit who knows how to make billions of dollars selling people lifestyle goods they can't afford. He also grew up in London and has already learned from his mother how to act like a snotty, British kid. So he should have no problem getting this whole pompous royal thing down. Also, need we remind you that if Chris Martin and Jennifer Lawrence continue to go strong, J Law would basically become royalty if Moses marries Will and Kate's daughter. THINK ABOUT IT.

If there is any couple that deserves to go from pseudo-royal to officially royal, it's the Jolie-Pitts. They've adopted enough children to populate their own small country, and Angelina Jolie is already head of the U.N. or something like that. Thus, the Jolie-Pitts would be able to perfectly transition into a life filled with international diplomacy and have no problem keeping the paparazzi at bay. Can you imagine Angelina Jolie and Kate Middleton hanging out on the reg? Come on, Knox. Make it happen.

He's Marky Mark's son, which means the Kate Middleton's daughter would be marrying the son of the greatest Calvin Klein underwear model that has ever lived. Which just proves that absolutely anything in this world is possible. The royal family and the Funky Bunch. Has a nice ring to it.

The Kardashian's poor decision making aside, Mason Disick is hands down the most loveable of the clan. He's used to growing up in the spotlight, his birth was shown on national TV after all, and the royal family will seem like a cake walk after the drama that's gone down in the Kardashian family. He's basically the only reason we still watch Keeping Up with the Kardashians, thanks for nothing Rob Kardashian, and it's an opportunity to finally have a REAL Lord Disick in the family.

The 11-month-old son of comedian Jason Sudeikis and genetic unicorn Olivia Wilde would be an unbeatable addition to Buckingham Palace. Olivia Wilde is used to this whole royal thing, her first husband was the son of Prince Alessandro Ruspoli whom she married when she was only 19 years old. If Otis' amazeballs parents don't win your vote, just look at how freaking adorable he is, Kate Middleton Jr. won't be able to resist.

Simon Cowell's son is British, wealthy and if his father has taught him anything, he's ready to leverage any opportunity at fame that comes his way. Also, his father invented One Direction. If that doesn't earn him enough brownie points to be a contender for the future Princess then we honestly don't know what does.

In true British royalty tradition, it would not surprise me at all if Kate popped out another little boy. He and baby George could wrestle, play tons of football and learn how to score chicks from crazy uncle Harry. Here are the few celebtastic females whose wardrobes, celebrity pedigree and killer first names not only make them cooler than I will ever be, they would also be perfect princesses.

If anybody knows how to handle the heat of the press and do it decked out in couture, it's the child of Kim Kardashian and Kanye West. North would bring some much needed swag to the stuffy palace, and it would bring us one step closer to FINALLY getting a reality show starring Prince Harry. We can see it now: Kate and Kanye Take Buckingham.

We've already seen what happens when American royalty meets British royalty. It's f*cking magic. Let's make that magic official. Also, only Queen B would be a suitable mother for a future princess.

Get this girl an official crown.

Although we would not want Tom Cruise and his sketchy antics tainting Will and Kate's perfection, we would have absolutely no problem with Katie Holmes and fashion icon Suri Cruise moving into the palace. Let's be honest, Suri Cruise was a trend setter for toddler's fashion before she was done breastfeeding. Just look at this girl, she already looks like Duchess Kate:

If there's one thing this world needs, it's more Ryan Reynolds and Blake Lively. I am still upset that we haven't gotten to see their wedding photos. However, I would forgive them for their oversight if they would do us the favour of pimping out their little bundle of joy to the future Prince. Knowing how freaking attractive the couple is we assume James is absolutely precious, BUT in true Reynolds fashion, we have yet to see the nugget. So here is the most recent photo of James:

The thought of Olivia Pope's baby actually having a shot at ruling a country is just so amazeballs it makes me tingle in the fun places. Kerry Washington's little girl would undoubtedly grow up to be a lady with equal poise, fashion and a squeaky clean image. Let's just hope she decides not to engage in an affair with the leader of the free world when she's older. We haven't seen Isabelle yet, so here's the best we can do:

OK Magazine would never need another cover story ever again if Katie Price's daughter married the Prince of England. Will and Kate would absolutely hate the new in-laws, but Princess is pretty darn cute and it's just such a guilty pleasure to imagine what it would be like if Katie Price had yet another reason to stay in the spotlight.

There's no way Ben Affleck and Jennifer Garner didn't name Seraphina with the hopes that she could one day be royalty. Not only would Ben and Jen would be a phenomenal addition to the royal family, Seraphina's dimples haven't gotten nearly the amount press they deserve.

What is the one thing that is missing from Ryan Gosling's epicness? A royal title. We have yet to see what Esmeralda looks like, but given that Eva Mendes looks like a perfectly photoshopped pinup girl come to life and Ryan Gosling is debatably the hottest guy to ever grace planet Earth, we're gonna gander that Esmeralda is a beauty. Since we don't have a picture of Esmeralda, this baby who played their kid in Place Beyond the Pines will have to do:

Who do you think the perfect match would be for the royal baby? Tweet at us! @sofeminineUK

10 Pregnancy Must-Haves To Prepare For Your Royal Arrival

12 Lavish Gifts To Gift To The Royal Baby