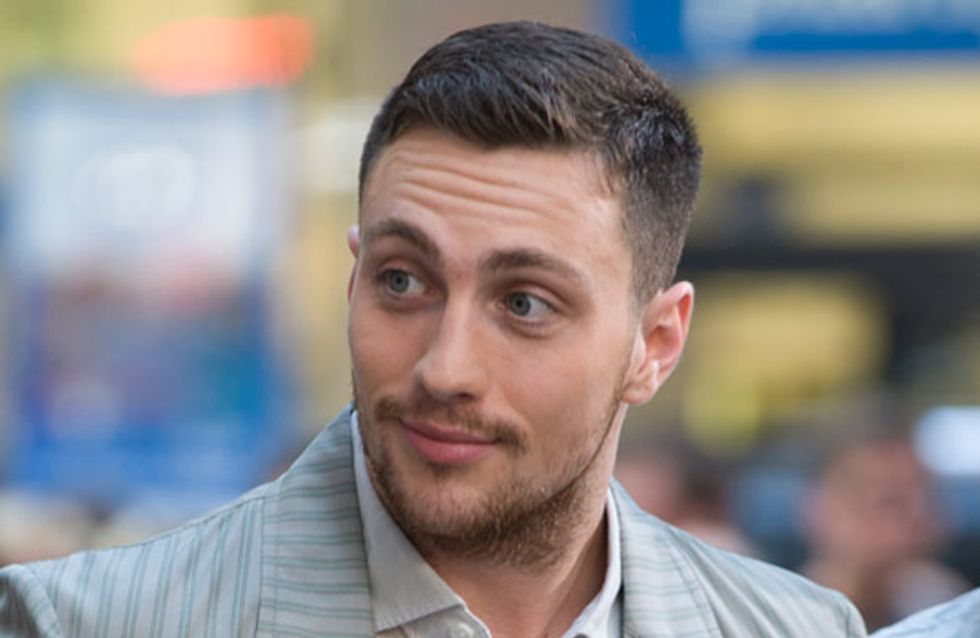 Young actor and husband to Fifty Shades Of Grey director Sam Taylor-Johnson, Aaron Taylor-Johnson has counted himself out of the running for the coveted role of Christian Grey. He's been talking about the film, his latest work and his marriage - just don't ask about the age gap.

Aaron Taylor-Johnson will not be considered for the role of Christian Grey.

The Kick-Ass star has taken himself out of the running - if he was ever in it - because he thinks he's neither attractive or old enough.

He told Metro: "I am not Christian Grey. I mean he is supposed to be the most gorgeous man on the f**king planet! And I'm not old enough."

Aaron is 23, while the sex-obsessed dominant character is supposed to be 27.

And it would be pretty awkward if he was cast, as the actor's wife Sam Taylor-Johnson​ will be directing the raunchy movie adaption of E.L James' hit book.

The actor - who starred as Robbie in Angus, Thongs and Full-Frontal Snogging back in 2008 - went on to gush about his wife, who's 23 years his senior.

He said: "I am thrilled she is doing it. She got the job and overnight it went crazy. But Sam in incredible.

"She's totally the right person to take it to a whole other level of class."

Aaron and Sam, 46, have dodged questions over their big age gap since getting together more than five years ago on the set of Nowhere Boy.

And he is not amused.

Aaron Taylor-Johnson shocked by the age-gap "uproar"
Aaron Taylor-Johnson was just a teenager when he fell for his director Sam Taylor-Wood in 2009. Despite a 23 year age gap, the attraction was mutual and the pair began dating as soon as filming was wrapped on Nowhere Boy, in which Aaron played the lead John Lennon.

He declared: "I would rather not talk about all this sh*t but that is all people want to talk about."

Apparently an "old soul", Aaron appears to still have a touch of the moody teenager about him when it comes to talking about his private life.

He said he learnt early "not to give a f**k what people write about my image because I can't keep hold of anything."

We think he doth protest too much...

What Aaron does want to talk about is his craft.

He continued: "I don't care about looking good - It's not about that. It's all about being raw and real."

This is why he chose to be "the average, wacky-haired spotty guy with dorky trainers" in Kick-Ass.

He may hate to talk about it, but it's clear that family is the most important thing to Aaron, who has two children with Sam.

He explained: "Sam and I have been hands-on parents ever since the day [our children] were born.

"And we never take a job at the same time because there is no one around for the little ones."

He went on: "I don't look back, I can think forward - but only about my family.

"I don't look outside that and certainly don't care what anyone else thinks."

If Aaron's not playing Christian Grey, then who will? Check out the actors in the running...