Introducing a new girlfriend to the ex is always awkward, but when you're Spencer Matthews it reaches a whole new level. When you're a notorious love rat any meet and greet is going to be weird...has he cheated on this one yet? It gets even worse when one of the girls is the lady your boyfriend has described as "the one". Stephanie Pratt must have loved that MIC party.

Let's be honest - none of us can believe Spencer Matthews and Stephanie Pratt are even still a couple.

With Spennie's track record we thought he'd have slept with their hotel receptionist on holiday then stolen away on a boat.

Or something equally absurd and love villian-like.

And yet, the couple were seen enjoying themselves in the south of France and proved they were still going strong at a recent Made In Chelsea party.

With Spencer's history these things are bound to be awkward, but there was one particular guest that made it just that little bit worse.

Caggie Dunlop was also in attendance at the event - it was the launch of her ISWAI pop-up shop on the King's Road after all!

Joined by friends Proudlock and Hugo Taylor, Caggie - aka the one that got away - was ready to meet the new girl in Spencer's life.

Not the best thing to have in the background when introducing her to the new girl.

He also said: "If I was in a relationship with Caggie, I could confidently say that I'd never cheat.

He went on to explain: "Caggie holds a very special place in my heart. My heart has always been with her in a way.

"Caggie's a forbidden love that'll just never happen for me."

One thing Spencer's new girlfriend can be confident about is Caggie's unwillingness to go there herself.

She spoke to OMG! about his philandering ways.

She said: "I think he just can’t help himself! He was like, ‘I wouldn’t do it to you’ and I was like, ‘You’ll never know because I will never go out with you!’

"He can say he would never do that to me because I would never go out with him. We won’t be going out anytime soon." 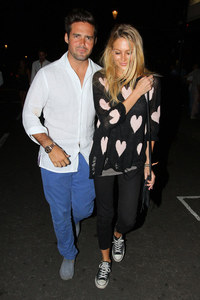