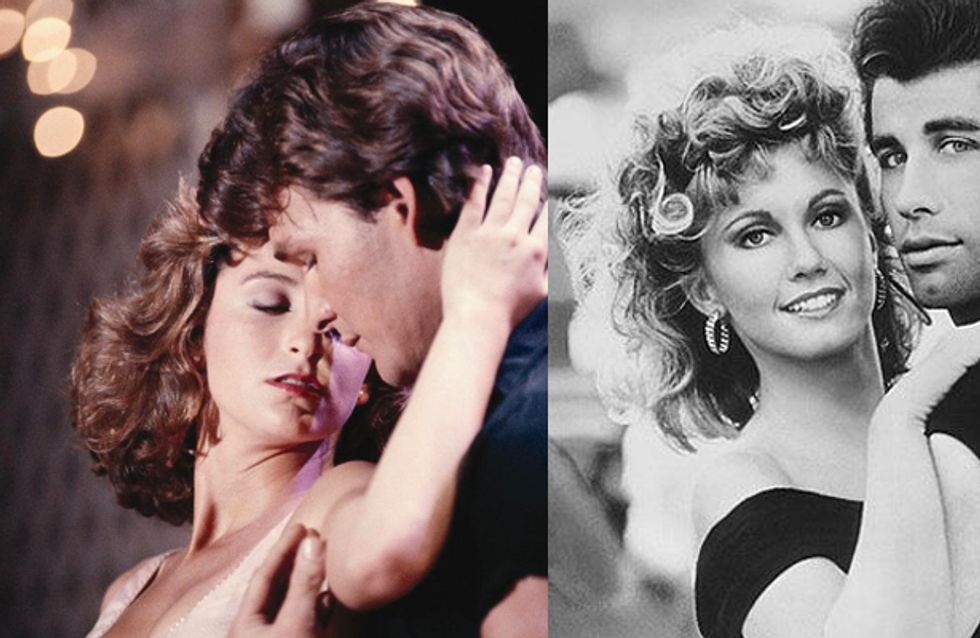 Heavy Oscars films getting you down? Ready to let a bit of cheer and light-hearted fun back into your life? If you’ve been having a rubbish week you should definitely check out these films, as according to a study of 2000 people by AXA these are the mood improving films you need to start watching. Let’s make a duvet day of it and binge-watch the lot, shall we?

Grease is the most popular feel gold film of the Nation – there’s something about its mixture of milkshakes, singing and dancing and matching gang jackets that is utterly irresistible. Just try to remain miserable watching Grease. You won’t be able to. It’s not possible!

Nobody puts Baby, or the significance of how wonderful this film is, in the corner. Patrick Swayze was an utter heartthrob, no other way to describe him, and even though there’s some serious class issues and poor Baby has been sort of repressed all her life, and Jonny is falsely accused of theft and so on and so on, it doesn’t stop you from smiling all the way through.

Scrummy silver fox Richard Gere employs a hooker with a heart of gold Vivian for a week. She goes shopping for fancy new clothes, shows up a couple of shop assistants, goes to the Opera, falls in love and is eventually rescued by Richard Gere from her hooker housing and everybody wins except his horrible ex-employee who tries to hit on her then actually hits her.

We’re half tempted to start watching this right now. What a film!

We remember when we went to see Mamma Mia in the cinema. It was like people had gone crazy. There was hysterical laughter, dancing in the aisles and cheering during the credits. There was almost a riot, a happiness riot!

Just your average run of the mill fellas stripping off to earn from serious cash - what’s not to love?! Especially because there’s that token gorgeous one. This is sort of a poor man’s Magic Mike really. But funnier. So much funnier.

Toy Story – the ultimate tale of friendship and bravery. It also confirmed our long-believed suspicions that our toys do in fact come to life and have adventures. We were reluctant to treat our toys with any less than love and affection after we saw what happened to Sid!

Don’t talk. Don’t even think. Just watch this clip. So many feelings.

Bridget Jones’s Diary is the epitome of what every girl wants to hear. That a devilishly attractive, thoughtful and intelligent man likes them even though they are essentially a massive screw up who falls bum first into cameras, can’t cook and drinks like a fish. Oh yeah, and you’ve got the sex God Hugh Grant after you as well. Absolute life-perk when they have a physical fight for you. Amazing.

If nothing else will, the littlest one in Despicable Me and her adoration for unicorns will cheer up any rainy day. It’s so cute we’re gonna die!

Finding Nemo is so cheerful, especially Dory. Dory is basically what makes everyone so happy watching Finding Nemo. She's so cute and quotable, and if you're feeling particularly down, she'll give you the best advice: "Just keep swimming!"

The Sound of Music

There's dancing in the hills, a group of family singers where the youngest is especially adorable, there's even a song about your favourite things for crying out loud! Sure some Nazis get involved and things take a downward turn, but at least Maria and Captain Von Trapp end up together!

Back to the Future

Back to the Future was the BEST film, especially when Marty's dad stands up to Biff. It has to be the best moment ever. Don't smile too much watching it.

Okay, is there anything happier than dancing penguins? No. No there is not.

It's definitely nice to review that people would miss you if you never existed. This film is a classic for a reason!

Everything about the first The Hangover first is just great! Mike Tyson, an escaped tiger, a truly infuriating tag along...we can always count on this one to lift our spiritis - it's too funny not to!

Probably the dark horse of the list? 2000 people really voted for Shawshank Redemption?! Of course, in many ways it's hugely feel good - fear will keep you prisoner, hope will set you free and all that but...well...a man gets falsely imprisoned for 25 years! Prisoners get horribly beaten to death! Our main man Andy gets beaten to a pulp. There's a lot of it that isn't THAT feel good, it has to be said! Still, what an amazing movie. And you have to admit (spoiler alert) the moment he crawls out of the pipes and into freedom is incredible.

The Wizard of Oz

"There's no place like home". This family film is definitely one for every Christmas, Easter and Bank Holiday Monday, namely because all of the characters were so great. The Scarecrow was our particular favourite.

Is there anything more touching than the relationship between a boy and his alien? Oh, and a flying bicycle? No, there is not.

Singin’ in the Rain

What a glorious feeling watching this film, we're happy again!