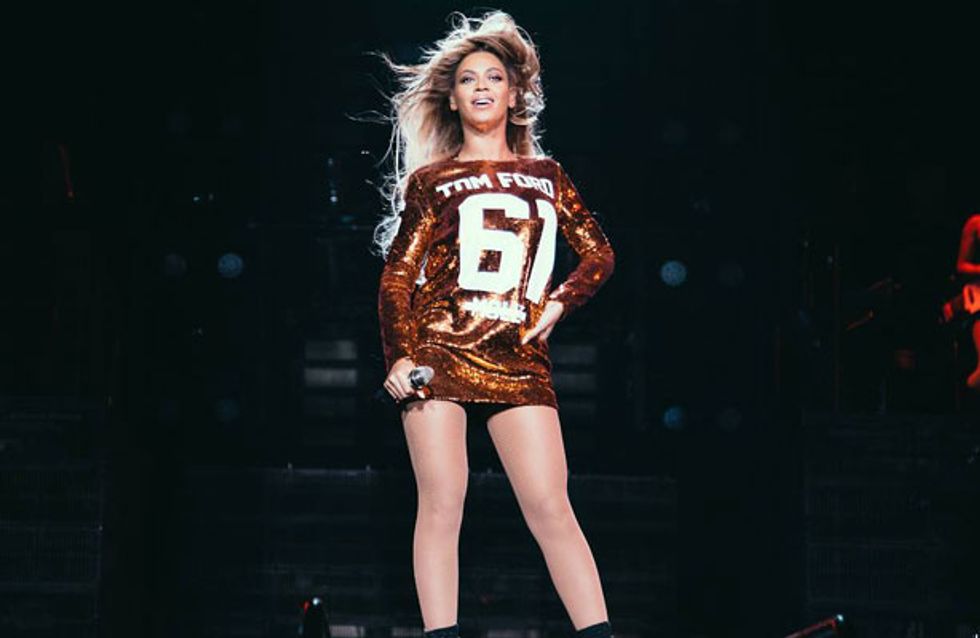 At the Amsterdam stop of the Mrs. Carter Show World Tour, Beyoncé showed major love for her hubby Jay-Z when she opened her concert rocking a shimmering Tom Ford Fall 2014 dress; a nod to his hit song and a frock the designer himself revealed was a knock-off of the rapper's tour attire. They're cute, we can barely take it! Here are some of our fave Jayonce moments ever!

It seems like the birth of daughter Blue Ivy has caused Beyoncé and Jay-Z to fall even more madly in love with each other. The once infamously private pair have grown more comfortable with granting the world a peek into their lives together.

Their most recent bout of PDA? When Bey took the stage in Amsterdam wearing a Tom Ford Fall 2014 sequined dress, a tribute to Jay's hit song of the same name.

Bey's on-stage nod to her hubby took us on a trip down memory lane of the couple's most memorable moments. Check it out below.

"All I need in this life of sin, is me and my girlfriend."

Bey and Jay might not have been acknowledging their relationship status at the time, but that matching denim moment? It said it all.

When asked what famous woman he'd like to be, Jay echoed our own sentiments as he described his talented wife. Bey was clearly smitten, and couldn't stop blushing.

In her Live at Roseland concert DVD, Bey treated her fans to a short clip of her and Jay's matching IV tattoos. The number 4 has a great significance to them both, and is also the date of their wedding anniversary.

Bey has confessed she's always been a "Jay-Z groupie", so it should come as little shock the then mom-to-be stood several months pregnant at one of his concerts while dancing and rapping along.

Holy backbend, Batman! This performance is happiness and perfection. In short: it's everything!

Both wearing Versace at the Versace mansion

The Carters rang in the New Year in style at the Versace mansion, wearing (what else?) Versace. How adorbs is Blue?

It's not hard to see why this has over 1 million likes on Instagram. Absolutely love!

Fist bumping at the Knicks game

Could Mr. and Mrs. Carter be any more awesome? Probably not.

Every moment of Drunk in Love

Jay-Z thanks God for Beyoncé

He clearly knows his woman's worth!

All these years, and he STILL can't believe she's all his.

Matching Timberland boots for the family

Now we need a pair!

What are some of your favorite Jayonce moments? Tweet us @sofeminineUK!