It’s official everyone, Beyonce and Jay Z’s daughter Blue Ivy is officially the cutest baby we’ve ever seen. The proud parents decked their little girl up in a white frock and black tights to visit the White House for Michelle Obama’s 50th birthday party, and Beyonce delightfully snapped photos of her adorable toddler!

Beyonce and Jay Z took their daughter, 2-year-old Blue Ivy, along to First Lady Michelle Obama’s 50th birthday party. Beyonce took some snaps of her at the party, and for heavens sake she. is. so. cute.

The 31-year-old performed at Michelle’s birthday party and looked fabulous clad in a short sequined gold dress, whilst Blue Ivy wore a super cute fairyesque white dress. Beyonce celebrated the day by posting the snaps on her Tumblr page. 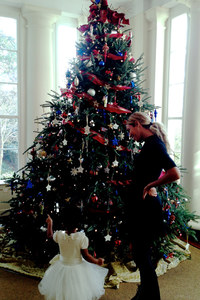 Since the couple are known to be good friends with President Obama and Michelle, the performance doesn’t really come as much of a surprise. Apparently Beyonce did a set of six songs, including Single Ladies and To the Left, before Stevie Wonder took over, singing Signed, Sealed Delivered and Do I Do.

It looks like phones were banned inside the venue, so we’ll be lucky to get a glimpse of her performance, but sneaky Mrs Carter took plenty of photos before the party began.

The snaps she shared with the world include an especially cute one of Blue playing with the Obamas’ pet dog, Bo, colouring in and looking at a huge Christmas tree with her mum smiling. Hang on, a Christmas tree? Can someone tell the Obamas that it is late January?!

Apparently the entire party was wonderful though (probably because of how cute Blue Ivy was) and musician Herbie Hancock gushed about President Obama’s speech about his wife. He said: “It was really beautiful and really touching. He said something – his voice almost cracked like he was crying. It was just beautiful, a husband speaking about his wife.”

Aww! Do you think Blue Ivy is the cutest? Tweet us @sofeminineUK