The world is in mourning following the death of former South African President Nelson Mandela. Prince William and a number of other celebrities have paid tribute to an "extraordinary and inspiring man" who helped to bring an end to apartheid. The Nobel Peace Prize winner died at his home in Johannesburg, South Africa, last night aged 95.

Prince William and his wife Kate Middleton heard the sad news at the Royal Premiere of 'Mandela: Long Walk to Freedom' - a film about the South African political figure's life.

Speaking about Mandela after the screening, William said: "I just wanted to say it's extremely sad and tragic news.

"We were just reminded what an extraordinary and inspiring man Nelson Mandela was. My thoughts and prayers are with him and his family. It's very sad."

The Queen this morning said she is “deeply saddened” to learn of Nelson Mandela’s death, adding that the former South African president “worked tirelessly for the good of his country.”

Idris Elba, who plays the inspirational South African in ‘Mandela: Long Walk to Freedom’, said: “What an honour it was to step into the shoes of Nelson Mandela and portray a man who defied odds, broke down barriers, and championed human rights before the eyes of the world. My thoughts and prayers are with his family.” 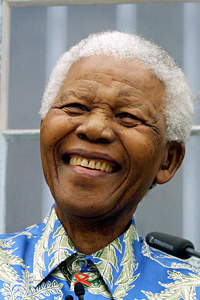 Charlize Theron forced to shave hair off by director
Charlize Theron is reportedly devastated that she has to shave her hair off for a second time. She first lost her locks for the upcoming film Mad Max 4: Fury Road. You’d think suffering for your art just the once would be enough, but unfortunately for Charlize’s blonde tresses, the director has decreed that some scenes need reshooting, meaning that the poor actress needs to whip out those hair clippers again, and she's reportedly not very happy about it.

Tributes from other stars poured in, including from Oscar-winning South African-born actress Charlize Theron, who tweeted: "My thoughts and love go out to the Mandela family. Rest in Peace Madiba. You will be missed, but your impact on this world will live forever."

​U2 frontman and anti-poverty activist Bono – who has campaigned in many African countries – said in a statement: "It was as if he was born to teach the age a lesson in humility, in humour and above all else in patience.

"In the end, Nelson Mandela showed us how to love rather than hate, not because he had never surrendered to rage or violence, but because he learnt that love would do a better job."

Actor Samuel L. Jackson tweeted: “Never met a better person in my life than Nelson Mandela. My sympathy to his family and his country.”

"Let us pause and give thanks for the fact that Nelson Mandela lived." —President Obama

American President Barack Obama, who was said to have been shaken by the news, said: “He no longer belongs to us — he belongs to the ages. I am one of the countless millions who drew inspiration from Nelson Mandela’s life.”

Fashion Police host Kelly Osbourne told her followers: “Today is officially one of the saddest days! The world has lost the most inspirational person to ever walk the earth rip #NelsonMandela.”

Fergie shared a snap of her and her Black Eyed Peas bandmate will.i.am and wrote: “Meeting Nelson Mandela at his house in Johannesburg was a truly memorable moment in life for me. He was an angel.”

​Singer John Legend posted a picture of himself with the much-loved former leader, captioning the image: “I’ve never been so honoured to meet anyone. What a heroic, beautiful life Mandela lived. Rest in peace.”

Rihanna uploaded a black and white snap of the former president to her Twitter and Instagram, and wrote: “One of the greatest men who's ever lived!!! #Legend.

“We will never forget the things this man has taught us, and we will never truly comprehend the level of strength that it took for him to endure many of his years!! Thank you #Mandela.”