A wedding day is the one time a bride can guarantee that all eyes will be on her, and these celebrities definitely do just that. From wearing a (literal) Princess gown like Kate Middleton or ignoring all tradition and going with pale pink like Julianne Moore, it is the one day you have permission to wear whatever you like from subtle to insane (see Celine Dion), and we have found our own favourite wedding gowns for celebrity la-la-land...

Sophie broke all of our hearts by taking Benedict Cumberbatch off the market earlier this year, but dammit the woman did it in style in a one-of-a-kind couture Valentino frock. We're definitely not jealous of her dress, her husband or her cumber-perfect life, okay?!

When Ciara married her football player boyf Russell Wilson earlier this year, everyone was OB-SESSED with her gown. And you can totally see why: the custom-made Roberto Cavalli dress featured lace bell sleeves and a corset front dress was the perfect mix of classic and boho style. If you want to see more pics of her dress - and you're gonna want to - just check any Pinterest wedding board.

Actress Christina hitched David Arquette earlier this year and looked quite simply perfect doing in an embellished, fitted dress and flowing veil. No wonder they both look so happy! He has the woman of his dreams and she has that dress!

Apparently Kim's gorgeous Givenchy dress was made to match the sheet of white roses at the wedding ceremony, and it did not disappoint. Love her or hate her, you have to admit she was a vision on her wedding day. Look, even Kanye's smiling!

Singer Solange Knowles married her music video director boyfriend Alan Ferguson in 2014, and in true Knowles style the wedding was nothing short of fabulous. Solange wore a dress made by designer pal Humberto Leon for Kenzo with attached cape, and managed to nab Beyonce as her bridemaid! Well, Bey is her sister after all...

It doesn't really get much better than a Lauren Conrad wedding that also doubles up as a Hills reunion, does it? Lauren's gorgeous gown was custom made by Mark Badgley and James Mischka. The dress boasted Chantilly lace and was covered in crystals and pearls, and had a whopping TEN FOOT train - but this was only added for the photo shoot. Ain't no way Queen Conrad's lugging round all that lace!

It's always going to a moment of breath-holding when you're waiting for the queen of style to reveal her wedding outfit, and Olivia did not disappoint. Ms Palermo forwent a traditional dress and instead opted for a simple cream cashmere sweater with ostrich feathers, white shorts and a full tulle skirt overlay that featured layer upon layer of satin and silk, all finished off with a chic low pony. Talk about low maintenance!

And speaking of low maintenance, here's another bride who kept it simple. Kiera Knightley wed James Righton in the South of France in 2013 wearing a pale pink, knee-length Chanel number complete with pumps instead of heels. A girl after our own hearts! Keira told Elle that there was a sentimental reason behind choosing that dress: "‘every time I’ve worn that dress, I’ve had a fantastic night and if you’ve got a dress where you’ve always had a fantastic night, it’s worth having another fantastic night in it." We hear ya.

Hilary Duff wore celeb favourite Vera Wang for her wedding to hockey player Mike Comrie. The former Lizzie Mcguire star was a long way from the dorky high schooler she once played as she donned a hand-painted silk tulle and organza mermaid dress adorned with giant blossoms, which matched the garden ceremony atmosphere perfectly. Also, that pose!

When Kate Middleton walked down the aisle at Westminster Abbey, all eyes were most certainly on her and her £250,000 wedding dress, which was created by English designer Sarah Burton, the creative director of luxury fashion house Alexander McQueen. The lace gown caused a media storm and its recent display in Buckingham Palace brought in a record number of visitors during the summer months of 2011. Although obviously it didn't get quite the same amount of attention as Pippa's Maid-of-Honour get up.

Model and actress Eniko married comedian Kevin Hart in 2016 after five years together and loves Vera Wang so damn much she wore two of her dresses at the wedding. For the ceremony, Eniko wore a gorgeous figure-hugging dress with spaghetti straps and a mermaid train, but it's the second dress that really has us swooning: a contoured gown adorned with Chantilly lace for that 'naked' look. Beautiful!

Some people wait a lifetime for a moment like this... ✨ #MrsHart💜 #VeraWangGang

Ellen DeGeneres and Portia de Rossi hosted a small wedding ceremony in the backyard of their Beverly Hills estate. They both wore Zac Posen for the occasion and Portia opted for a beautiful, princess-style backless pink halter gown, whereas Ellen chose a white tuxedo style ensemble.

You know that when the one and only Victoria Beckham is designing your wedding dress, you're pretty much guaranteed to look a million dollars. And Eva Longoria did! A simple fitted white dress with a sweetheart neckline was all Eva needed to look stunning. VB said on Instagram '@evalongoria the most beautiful bride.I am honored to have created your wedding dress X Thank you for asking me!!! X We love u! X'.

Here are the other celebs who looked stunning walking down the aisle... 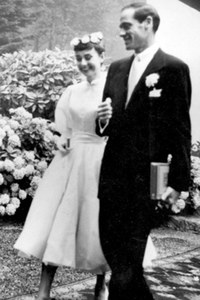 44 Stars With Acne Who Prove You're Not The Only One