Kristen Stewart may not be the first name that comes to mind when you think of classic quilted bags and little black dresses. But the Twilight actress is indeed the apple of Karl Lagerfeld's eye - and the new face of Chanel! Only K-Stew could make haute couture look grungy yet great. This is one Chanel girl we don't expect to see in a tweet suit anytime soon.

When it comes to Kristen Stewart's look, it's one some would describe as "goth" or "grunge". But the head of fashion house Chanel, Karl Lagerfeld, saw beyond her ripped jeans and smudged eyeliner and made her the new face of the brand.

If this photo is any indication, then it looks like the former Bella Swan is staying true to her signature dressed down style. She was seen entering the Chanel offices wearing canvas Chanel sneakers, a navy blue Chanel hoodie, a Chanel graffiti backpack and a classic Chanel "Boy" bag.

The backpack is fresh off the Spring 2014 runway and is sure to be a coveted item once it becomes available to the masses. (Or at least, to the very few who can actually afford it.)

Many were worried about how K-Stew has been doing following the end of a drawn out on-and-off courtship with longtime love and Twilight costar Robert Pattinson. A source close to Kristen told E! News she is "is doing really well," and loves working with Karl and Chanel.
​
She "is in amazing spirits and is in a good place right now," the source added.​

Just because Kristen's been busy with fashion doesn't mean she's forgotten about film! She will star opposite Julianne Moor in the upcoming drama Still Alice and she'll reunite with her Adventureland costar Jesse Eisenberg for American Ultra.

Are you excited to see Kristen rock more Chanel? Tweet us @sofeminineUK!​ 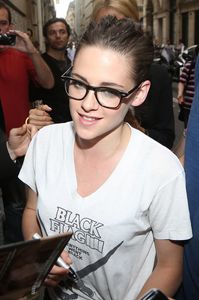