Birthdays are the best excuse to get together with your closest pals for a big old knees up, which is exactly what Nicola Roberts decided to do.

Together with her Girls Aloud bandmates Cheryl Cole and Kimberley Walsh, they jetted out for a debauched weekend of fun in Amsterdam.

The candid snaps show that it certainly was a birthday to remember, as they drunk champagne and partied alongside a whole host of strangely masked club goers at posh nightspot Supperclub.

Kimberley uploaded a number of incriminating pics to her Instagram, including one of the birthday girl giggling hysterically while having her toes sucked by a mask-wearing performer.

Cheryl shared more photos of the terrifying-looking club goer, who looked to be coming for her next, writing: “HELPppppp!!!!”

Later she tweeted: “Messy #Amsterdam” and a hilarious snap of Nicola balancing a giant mirrored disco ball on her head.

The girls were clearly in good spirits, posing for a number of snaps all looking pretty sozzled.

But after seeing all the photos posted online following her crazy weekend away, Nicola took to Twitter to tell her BFFs off for embarrassing her.

The birthday girl tweeted: “Cheryl is ruining me on Instagram.”

However it looks like that wont put Nicola off from doing the same thing next year, as the Lincolnshire lass herself admits: “I’m spending every birthday in Amsterdam! We’ve had the best and funniest weekend ever <3 x”

Guys – we totes want an invite to your next jaunt in Amsterdam!

Check out more photos from their crazy weekend below and tweet us what you think @SofeminineUK! 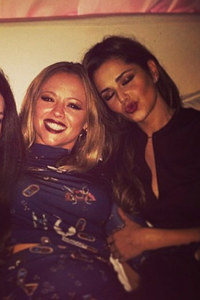 Alison Potter
…
birthday
From hair ideas to outifts, look no further for your daily inspiration