Wowzer! Every time Christina Aguilera makes an appearance we think she can't look any more fabulous, but she’s proved us wrong. Xtina looked fitter than ever on the America's Tonight Show with Jay Leno on Wednesday night. Fans were stunned by her slender figure - check out the pictures!

Christina Aguilera is not slowing down her total body makeover just yet.

Over the past year we’ve seen Christina getting tinier and tinier and she almost looks like she's returned to the slamming fit bod she had back in the 90s - except back then she didn’t have any children.

Christina, 32, turned heads revealing her slimming bod on the Tonight Show this week, rocking a low-cut LBD and a slash of scarlet red on her lips - she knew she looked amazing.

The star paid a visit to Jay to promote her return to the The Voice US for its fifth season. She expressed to Jay her excitement over returning to the spinning red chairs and reuniting with coaches Blake Shelton, Adam Levine and Cee Lo.

She said: "It's like coming back to school. The boys are fun!

"There's something about the four of us getting together. We can't be serious for more than 30 seconds. The guys make me laugh!"

It was evident the star has found a new self-confidence. She told Jay: "I'm 32, and I feel sexier than ever, just because you know what you want."

Proving that, Christina recently posed for Maxim in one of her hottest spreads yet.

She said: "I'm such a down-to-earth girl, I'm comfortable in just a jersey and boy's underwear...trying too hard to be sexy is the worst thing you can do. Sexiness should be effortless.

​“The one place I don't need to be in control is in the bedroom."

When Jay asked Christina to explain what she meant about letting loose in the bedroom, she said: "I'm a big micromanager.

"I'm a stickler about organisation: everything needs a place, a purpose... I think every woman should relax and allow herself to be pleased in the bedroom. It's the one place I can let go."

​Sources close to the diva say she’s been training hard with fitness pro Tee Sorge and has taken up meditation in the form of yoga to stay slim and slender.

We hope she keeps it up because her newfound fitness regime is doing wonders for her.

An insider told Us Weekly: "It's more of a mind-body thing for her...she believes in exercise that she enjoys, doing strength work as opposed to intense cardio."

Keep it up Xtina - you look amazing!

Do you think Christina looks fab or do you think she should slow down on the weight loss streak? Tweet us @sofeminineuk 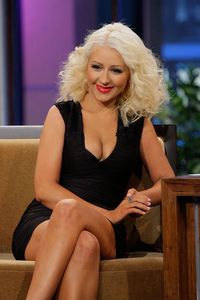