Katie Dippold is best known as the writer of US comedy series Parks And Recreation, but she's now turned her talents to film writing and has teamed up with Bridesmaids director Paul Feig for The Heat.

This 31-year-old is revolutionising comedy. In Katie's hilarious new movie The Heat, Sandra Bullock plays an FBI agent and Melissa McCarthy is a Boston detective. The film follows the pair as they attempt to take down a mobster and form a unique friendship along the way.

The New-Jersey born writer was determined that her first movie would feature two female stars in a change from Hollywood's norm of male leads. Katie talks to us about where her first movie idea came from, what it was like to work with Sandra and Melissa and why she was proud to focus on a strong, female friendship - and not just clichéd romance.

Hi Katie! How did the idea for The Heat come about?

I love cop movies like Lethal Weapon and 40 Hours, and growing up as a female I always wished I could be doing that - I didn’t want to just be a girl that guys are dating. I wanted to be the funny, bad ass tough cop - so The Heat was just wish fulfillment.

I tried to think of it like, “What do I want to see in the cinema?” It was for ladies who want more than just to date the cool guy - they want to be the cool cop.

I wanted my main characters to be confident and good at their jobs. I didn’t want it to just be about these two ladies tripping over their purses in high heels. The characters have some real personality flaws, but when it comes to their job, they're solid.

Did you have a part to play in casting Sandra Bullock and Melissa McCarthy?

They wanted to do something together, so I was the luckiest woman in the world that the script finished when they were ready. I was told by the producers that they were looking and that they were interested in my script - it was like a dream come true.

Are the girls friends off set?

I believe they didn't know each other very well at first, but that they were fans of each other. And thanks to the movie they became best friends in real life.

As much as they're celebrities, they're both just real, mellow, down to earth people - so it makes sense to me that they would be such good friends in real life.

And what was it like working with Bridesmaids director Paul Feig?

He's the best. He's a writer's dream. In Hollywood, you get scared you're going to sell your movie and you're never going to see it again. It could get re-written by a bunch of different people and when you finally see it on the screen, it's totally different.

But I'm very grateful to Paul because he let me do all the re-writes and be on set the whole time. I learned so much from him. He's just a brilliant, wonderful, kind person and he really is a writer's dream director.

Did you take inspiration from Bridesmaids when writing The Heat?

I was a huge fan of Bridesmaids. I remember seeing it at the cinema and just laughing so hard. To have a movie written by those women and starring Kristen Wiig delivers comedy from a point of view I haven't heard in a while.

There are so many jokes in Bridesmaids that I feel come from a woman's experience. Like the opening scene, when she puts make-up on and crawls back into bed like she woke up like that - I just thought that was so refreshing.

Were you always keen for the main characters in your movie to be women?

Yes, they were always going to be women. The fear was that I would write this and they would cast it with men, but luckily that didn't happen.

The Heat focusses on a female friendship and features only a hint at a romantic plotline, which is unusual. Was this a conscious decision?

Yes. What was refreshing to me was that in so many movies, the woman's goal is to find a husband. I think that's great - I have nothing against marriage and I hope everyone is happy with their own romantic lives - but it just felt important to have a movie in which that wasn't the number one goal.

Do you think females get a bit of a hard time in Hollywood?

It's tricky, because I know this has been a long battle for women, but my experiences have been fortunate. Parks and Recreation was extremely female friendly - I was writing for a female lead and there's four women on staff at a time. Plus all the men were feminist and women supporters. And then with The Heat, Paul Feig is also female friendly - so my experiences have been very fortunate.

I just try to be as proactive as I can. If I start feeling like it's harder for females, that just lights a fire under me to work harder on a script to make it as good as I possibly can and therefore make it harder to turn down.

For instance, I always wished there would be a buddy cop movie with women...so I decided I had to be the one to write it!

How did you get into comedy?

I was in college and there was an improv group that a friend of mine persuaded me to try out for. From there this friend started doing stuff for Amy Poehler's theatre, so I took classes there throughout college and when I graduated I auditioned to be on one of their permanent improv teams.

And so for the first five years in New York, I would temp during the day and do shows and late tech rehearsals at night, every night. After many years of that, I think my first good comedy job was for a sketch show in America called MADtv.

They had a showcase for performers, where you could write original characters and present them. I did some characters for it and they brought me out to audition. I didn't get the part, but I gave them my writing packet and they ended up hiring me as a writer.

I was there for a few years and then I wrote an original TV pilot, which my boss at Parks and Rec, Mike Schur, read. So then he hired me. I have worked very hard!

And when you're not writing, what do you like to do?

I'm a big fan of going out to dinner. And I still do improv shows out here. Plus I'm a big horror movie fan so I'll get friends over and have horror movie nights.

What are your favourite films and TV shows?

Shaun Of The Dead and Cabin In The Woods are favourite movies of mine. And TV shows - I was a huge sitcom nerd growing up. Cheers was a favourite. And Golden Girls.

What else is in the pipeline for you?

Right now I'm actually working on a draft for the sequel of The Heat. And then when I've finished that, there's another movie idea I've sold that Paul Feig has agreed to direct - it's a mother-daughter comedy.

The Heat hits cinemas on 31st July - check out the official trailer: 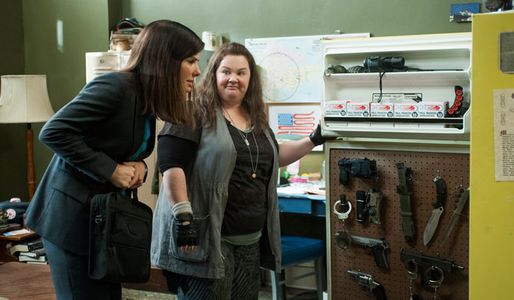