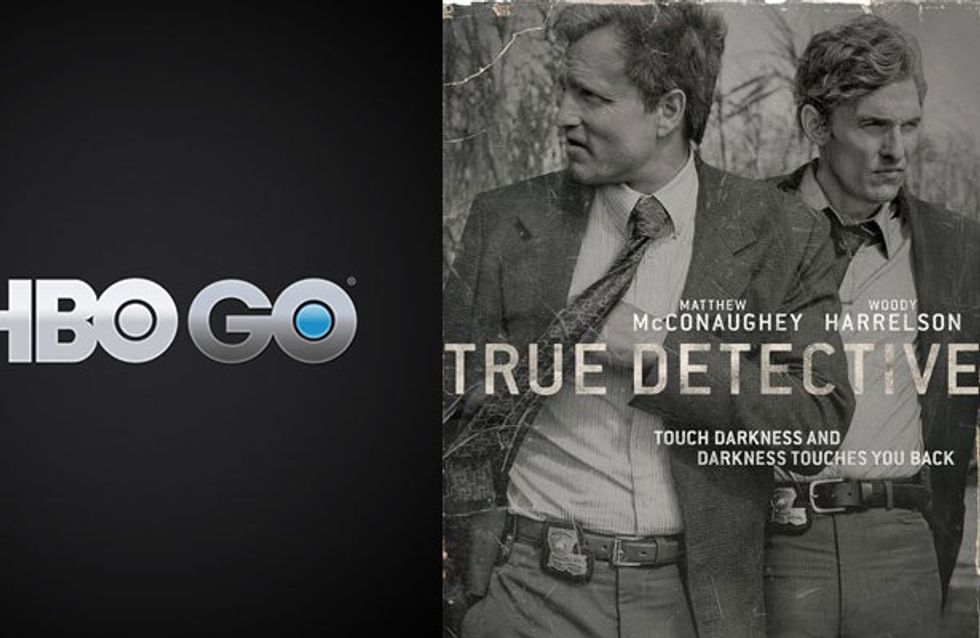 HBO Go promised its subscribers that the season finale of the hugely popular True Detective would go up on the site at 9PM E.T., but the sheer number of users logging on caused the streaming site to crash for several hours. Fans of the show, desperate to find out if Marty and Rust would make it out of Carcosa alive, took to social media to unleash their anger over HBO Go's technical issues. Oh dear.

Due to overwhelmingly popular demand for #TrueDetective, we've been made aware of an issue affecting some users. Please try again soon.

And with that brief tweet from HBO Go, fans of True Detective were sent spiraling into teary fits of rage and commiserated, I.E. launched abuse at the HBO Go service, with fellow watchers on Twitter.

@madelman1 K. Trying to find a way to watch it illegally. Since the legal route is not an option.

I now have time on my hands, and it is in the form of a flat circle. #HBOGO #TrueDetective pic.twitter.com/1cIqUy0tHb

It seemed like no matter how many times you refreshed or willed that spinning wheel to stop, the relatively new streaming site couldn't handle all the activity.

As I sit on my 50th minute of trying to get #HBOGo to work, I start to question my priorities.

Hours went by and the problem still remained, causing numerous fans to go bed without watching the suspenseful conclusion to the show. Unfortunately for them, they now have to spend the all of today avoiding spoilers - and we know how hard that's going to be since True Detective is all anyone (and the Internet) wants to talk about!

All I want to do is go home and watch the #TrueDetective finale. It's really hard not reading any social media. #hbogo #hbo @HBO

Thanks to "HBO NO GO" not working last night, I am dodging spoilers of True Detective like it's my job today! #hbogo #truedetective

SPOILER ALERT! (So what happened?)

For those lucky ones who did get to watch the finale, we finally glimpsed the bizarre life of serial killer, Errol Childress, a member of the sickening cult that was terrorizing Louisiana. He was basically a nightmare come to life. His sprawling estate was home to his mentally unstable half-sister-turned-lover, and he clearly had a thing for baby dolls and talking to his dead father who was tied up on a mattress in the shed.

After confirming that Childress was the man they'd been looking for all season, they ambushed Childress' home and interrogated his half-sister-turned-lover. Rust chased after Childress and was lured into the center of Carcosa, a perverted underground maze built by the serial killer.

Once he reached the end of the winding maze, Rust was momentarily distracted by a vision. ​Childress suddenly appeared from behind and stabbed Rust in the stomach. A fight ensued, giving Marty time to catch up to his partner and, hopefully, shoot Childress dead. Marty did get a few rounds off but it didn't stop Childress altogether. In a stunning move, he threw his tomahawk straight into Marty's chest. However, as he stood over Marty, ready to finish the deed, a bleeding Rust shot Childress in the back of the head.

Okay, we won't give away everything. Just know that most of your lingering questions are answered in the heart-stopping finale that's earned a lot of praise from viewers!

Wow. @McConaughey just gave, to my mind, the performance of his career in #TrueDetectiveFinale. Kudos to you man, that last scene was grace.

Just finished #TrueDetective. Won't say anything of course, but what an achievement that was. Kind of makes every other show feel lame.

#TrueDetectiveFinale was mind-blowing! Had it somewhat pieced together but even still #TrueDetective season 1 couldn't have ended better

Did you have #HBOGoProblems last night too? Vent away! Tweet us @sofeminineUK!

Joe Dempsie a.k.a. Chris Miles, then
by the editorial team