Did Justin Bieber make fun of a fan about their weight?

We can’t make up our minds about Justin Bieber. Sometimes he is completely adorable and doing things like holding private concerts for an injured fan, and sometimes he seems extremely horrible, spitting at fans and storming out of concerts. The newest addition to the Bieber bad books is that he has apparently been extremely harsh to a fan about their weight whilst chilling at the poolside in Australia. We want Bieber to be a total babe all the time so we can love him, but he makes things so diff

Justin Bieber has reportedly been acting like a bit of a bully recently, and attacked a fan about her weight.

According to The Daily Mail, the 19-year-old pain – oh sorry, pop star – was chilling by a pool in Perth when he looked over to a group of four girls in bikinis and said: “What are you, Hawaiian or something?”

Justin apparently responded: “You look like a beached whale!” 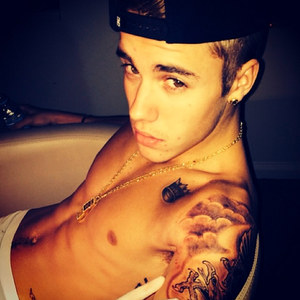 The shocked girl allegedly responded: “Are you serious?”

The Baby singer then said: “You should go on The Biggest Loser [a weight loss reality show]."

According to a witness, there was silence following this outburst and the girl has said that the remarks brought her to the verge of tears.

Another witness also added that Justin made a gesture with his hands to indicate a big belly.

Well, some of us went through puberty Bieber! We know you don’t understand what that’s like but…

Another guest, whose name is Helen Robinett, reportedly made a formal complaint to the hotel about the incident, saying: “They said the girl was ok and she was a Bieber fan. She may appear ok but I work in styling and fashion, I know how women view their bodies, what body image issues women have.

“That kind of comment can have a serious impact and repercussion. That’s why I;m so upset about it.”

Justin has also mentioned the fact that he’s made mistake – you don’t say – whilst promoting his new movie, Never Say Never.

He said that the movie: “really shows who I am as a person. I make mistakes growing up. I’m not perfect; I’m not a robot. People forget I’m a human being…I have to make mistakes and grow stronger.”

It seems like you forgot that the girl at the pool is a human being too Bieber! You do not have our sympathy!

Do you think Bieber’s remarks were acceptable? Tweet us @sofeminineUK