Louis Tomlinson was signed to Doncaster Rovers not long ago and this weekend he took part in a charity football match up in Glasgow. It wasn't exactly the display of footballing prowess he was hoping for. After suffering a painful tackle from Gabby Agbonlahor, Louis threw up on the sidelines and had to be put on the bench. True to form the death threats rolled in.

Louis Tomlinson was left limping and empty-stomached yesterday after taking part in a charity football match.

The game at Celtic Park, in honour of Stiliyan Petrov, pitted professional footballers against celebrity enthusiasts.

21-year-old Louis came up against Aston Villa footballer Gabby Agbonlahor and ended up writhing in pain on the pitch.

The painful tackle left him limping off the field where he threw up twice.

One Direction fans were both proud of their favourite singer and appalled at the attack from the professional footballer.

One fan wrote: "My whole timeline is full of pictures of Louis getting hurt. I'm going to kill that guy!!!!!!!! HOW DARE YOU HURT LOUIS?!"

While another added: "@Louis_Tomlinson Are you ok?? If he hurt you I promise that I'll kill him!!! No one can hurt my baby!!! Grrrr!!" 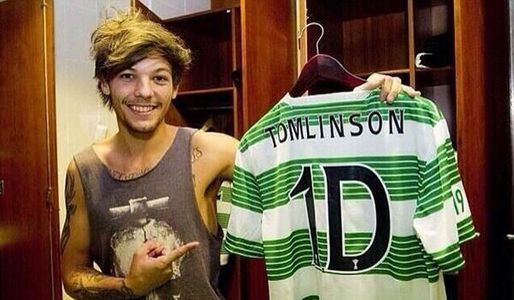 One went straight to the man behind the challenge and tweeted: "@gabby_10 This guy hurt Louis knee. I shall hurt your face. I better hear that you apologized or I will find you, and I will kill you."

Sports commentator Brian Moore even had his share of abuse – from his daughter.

After my One Direction tweet mocking Louis Tomlinson the first death threat has arrived - from my daughter.

Apparently unafraid of the legion of girls armed with smartphones, the sportsman said he would apologise to Louis but it was not the most important thing about the match.

Gabby explained: "It was just one of those things. I’ll apologise to Louis when we meet up with everybody else after the game

"I know he enjoyed playing in the game and it’s fantastic that he took time out to be here, and the same with everybody who played.

"It was a fabulous day for Stiliyan Petrov and for Celtic and their respective charities.

"It’s great to see all the people who came here to play in the game and all the fans who turned up to support such a worthy cause.

"I know Stiliyan is really grateful and appreciative and that’s what today’s all about."

Stiliyan had a terrible battle with cancer and the match was a celebration of how he has overcome it...

Unfortunately we reckon for some Directioners, Louis' knee might be more important.

What do you think of the Louis football drama? Tweet us @SofeminineUK