Home / Entertainment / News celebrities / Can We All Just Take A Moment To Remember Drake In Degrassi: Next Generation

Can We All Just Take A Moment To Remember Drake In Degrassi: Next Generation 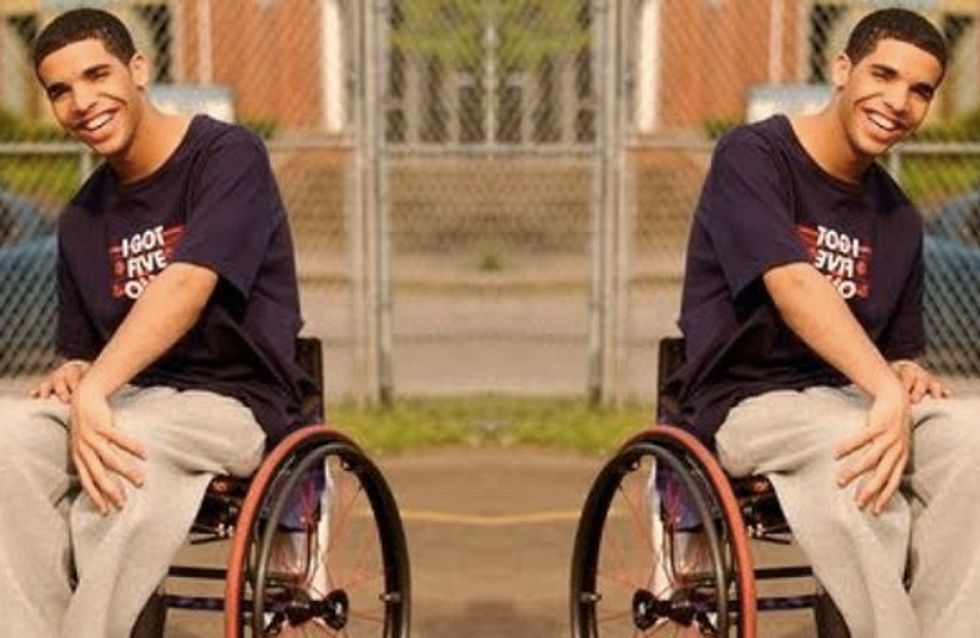 Those who are on top of their Netflix shows will know that it recently debuted teen show Degrassi: Next Class. Not that interesting, right? But here's a cool fact: Y'know Drake? The rapper who penned such hits as Started From The Bottom and Hotline Bling, and is the reigning king of drunk uncle dancing? Well, way before he became Drake the rapper, he was Aubrey Graham the actor. In 2001, 'Drake' was nothing but a middle name. And the series that made him a star? Degrassi: Next Generation.

Way way back, in 2001, Aubrey Graham was gearing up to start work on a Canadian soap opera for young adults about the trials and tribulations of being a teenager at school. He would be playing Jimmy Brooks, later know affectionately as Wheelchair Jimmy, a basketball hot shot at Degrassi High. Only, Aubrey Graham is no Regular Joe actor, Aubrey Graham is DRAKE. THAT'S RIGHT, DRAKE FROM RAPPING.

Who woulda thunk it, huh? That tall, hunky drink of water who let Nicki Minaj rub her fine china all over his meat and potatoes, who has major rapper beef with almost every rapper that isn't himself, was once in a silly high school drama playing a wealthy high school basketball star, engaged to Trina. ("Who the eff is Trina?" I hear you ask. It doesn't matter. Don't worry about it. Move on.)

Now, how to explain Degrassi. It's emotional, I'll tell you that much. Imagine being back at high school, and how crap that was, and now imagine it was like, a HUNDRED times worse, where anything that could happen did happen, and sometimes even the stuff that couldn't happen happened as well. Drake was but a young novice rapper when he first appeared on the show, and he recently told W magazine that he would be up all day recording the show and then spend all night recording 'sick beats', as the great Tay-Swizzle would say, like the one below.

To give you a little insight into his time on the show, let's just say Degrassi High was not kind to ol' Jimmy Brooks. When we first meet Jimmy he's a typical cool guy: he plays b-ball, has a school president girlfriend, and is kind of a dick to people. He also raps, which is a major coincidence because he now plays a rapper full time called Drake. He bullies this guy called Rick for a while, as does everyone at Degrassi, and then warms to him. But after some kids play a Carrie-style prank on Rick, he leaves the school, but returns with a gun. While he doesn't kill anyone, he does shoot Jimmy in the back, paralysing him from the waist down. It is now a majorly iconic scene in TV history - such drama, only heightened by the addition of Imogen Heap's "Hide and Seek" to this youtube video...

... Which was obviously inspired by this ending to the second season of The O.C...

... Which birthed this brilliant sketch on SNL:

​Anyway, I digress. Aubs recently told W magazine: '"Back then, I’d spend a full day on set and then go to the studio to make music until 4 or 5 a.m. I’d sleep in my dressing room and then be in front of the cameras again by 9 a.m. Eventually, they realised I was juggling two professions and told me I had to choose,” Drake laughed. “I chose this life.”'

Yeah, that's right. Drizzy-Drake chose the thug life. It didn't choose him, mind, but the thug life didn't really have a choice once drake turned up with his Degrassi alumni overnight bag. Y'know that Drake song "Started From The Bottom"? Well, you just can't write songs like that without experience. Without knowledge. Lyrics that profound don't come to you just willy nilly, you have to have lived through the hardship of growing up in an affluent region of Toronto playing a wheelchair-bound teen in a popular Canadian soap.

And so, whilst we're desperately waiting for his new single with Rihanna to be released, or channeling Drizzy-Drib-Drab-Drake's Hotline Bling moves on the dance floor at our cousin's wedding, or leaning out of the window of our mum's car and aggressively rapping along to "The Motto" in the face of the learner driver in the car next to us, we must remember where Drake came from. What his real name is. Where his bottom is, and where his heart remains. It's in Degrassi high school, wheeling around and rapping about bitches making lunch for the school talent competition. Long live Jimmy, we love you.