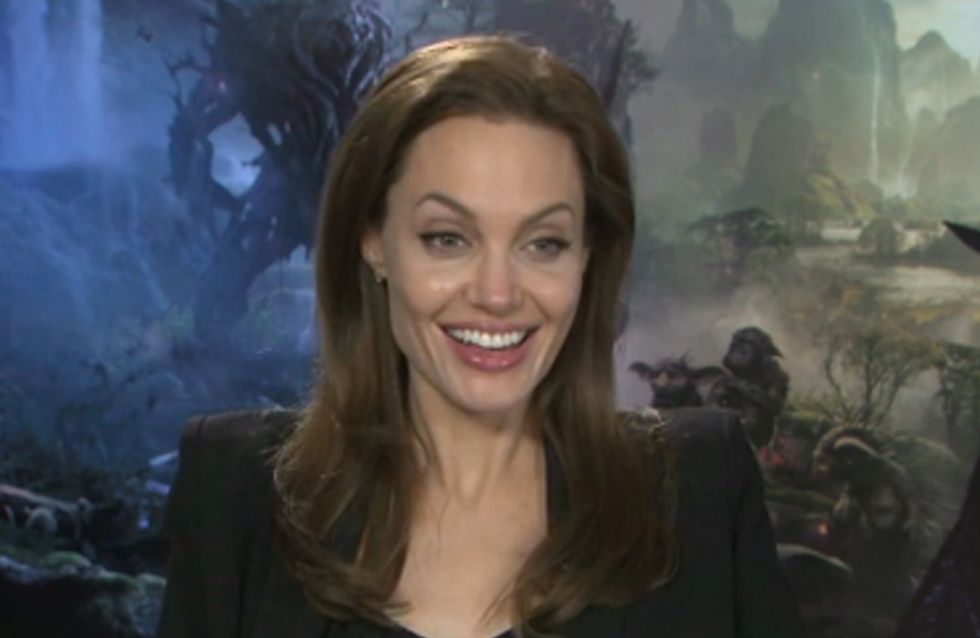 Angelina Jolie is playing Maleficent in the upcoming Disney film, so we spoke with the actress to ask how she manages acting alongside being a mother to six children, why she has always wanted to be a villain (over a princess?! What!) and if Brad Pitt is a real-life Prince Charming. The star even referred to Brad as a "great husband" totally making us double take. Did they get hitched in secret already?

We couldn't help but feel a little thrilled when we sat down with Angelina Jolie to chat about her new release Maleficent, only to hear the movie star casually name Brad Pitt as her husband.

Have the long-term partners finally gotten hitched?! We thought they were still engaged! Where was the lavish wedding? The white doves? The fairytale horse and carriage? Doesn't anyone else feel a little cheated?!

Rumours have been flying around for years of their impending nuptials since they got engaged in 2012, and it sounds like they could have been secretly married as she told our interviewer: "I feel very fortunate, there are so many mothers who don't have the ability I do to work and then have time off or to take turns with their partner, I have a great husband in Brad."

Angelina's fairy tale reality could well be the reason that the Hollywood star is so keen to play the villain in Maleficent, in Disney's dark and twisted revivial of 1959's classic Sleepy Beauty that is due to be released on May 28th. If you remember correctly from the original, Maleficent was the one had a crow, kidnapped Prince Philip most unjustly and turned into a giant dragon.

However, since the synopsis of the movie describes Maleficent's descent into evil as "a betrayal that ultimately turned her pure heart to stone", we're guessing the movie is going to go down quite a different route.

Angelina Jolie told us, she is absolutely delighted to be playing the evil character and considers Brad Pitt to be a real-life Prince Charming (because they're married and living happily ever after, perhaps?!)...

What do you think? Just a slip of the tongue, or something more? Tweet us @sofeminineUK