Katy Perry’s performance on The X Factor final this weekend was universally panned, so perhaps that’s why the California Gurls singer decided to use a backing track for her appearance at the NRJ Music Awards in Cannes. The only problem was she mistimed her miming to the backing track so absolutely everyone realised Katy’s little secret. Not only that but she was then forced to restart the performance – oh the shame!

Katy Perry is certainly not having the best week.

First her performance at the X Factor final was panned, with scores of viewers on Twitter joking that if she was a contestant on the show then she wouldn’t have made it past the audition stage with those vocals.

Then Katy was all set to perform her hit Roar at the NRJ Music Awards in Cannes, but due to technical issues it emerged that she was in fact miming to a backing track and wasn’t really singing live at all.

It’s not known whether the 29-year-old decided to use a backing track because there was a problem with her voice, but it was certainly a decision that the Unconditionally hitmaker regretted. 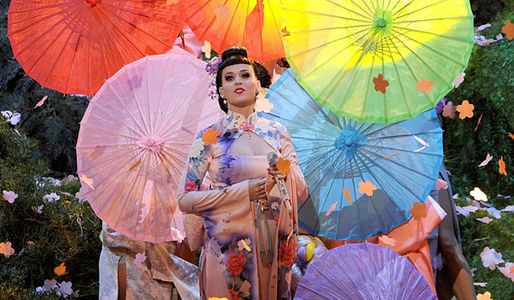 To add insult to injury, a short clip of the embarrassing incident has emerged via LiveLeak, which shows Katy bounding onto the stage wearing a shiny blue mini-dress and immediately getting stuck into an energetic dance routine to her song Roar.

But just as things get going, it’s clear that the timings weren’t right and Katy was lip-syncing as her dancers appeared to be reacting to a different part of the track.

Before things went any further, the host of the award show stopped the performance and gestured to Katy to stop dancing and then for the music to be cut.

After speaking briefly in French, he changes to English so that the American pop star can understand, and says: “If you don’t mind, we can restart. We had a little problem with the sound.

“I’m sorry to stop all your energy – I prefer you to be the best.”

Ever the professional, she puts the awkward incident behind her and makes sure to hit her mark – and this time sing it live.

Following the event, the awards show organisers released a statement to explain what had happened with Katy’s performance.

They said: “Katy Perry sang live during the NRJ Music Awards in Cannes on Saturday night, but unfortunately a bad soundtrack was accidentally launched, taking over the live performance of Katy at the beginning of the delivery tube of the Roar.

“TF1 and NRJ present their apologies to Katy Perry…for this technical problem beyond our control.

What did you think of Katy’s embarrassing incident? Tweet us @sofeminineUK!