The Party Prince is reportedly tired of the bachelor life according to close friends, which means we could be expecting another announcement of a royal wedding any day now. According to sources Prince Harry has managed to convince his girlfriend Cressida Bonas that they should tie the knot, which was the biggest obstacle standing in his way of marriage.

The world’s most eligible bachelor is about to be taken off the market as Prince Harry’s girlfriend Cressida Bonas has finally agreed to marry him.

If the rumour mill is true, the fourth in line to the throne is said to have wanted to settle down with Cressida for a while, but she’s been reluctant to commit to becoming a permanent part of the Royal family.

But the beautiful blonde 24-year-old – who has been dating Harry for over a year – looks like she’s overcome her fears, with friends saying that a 2014 Royal Wedding looks definitely on the cards.

Insiders reveal that the 29-year-old is keen to marry after seeing how happy his brother Prince William and Kate Middleton are now that they’ve married and settled down with baby George.

“Cressie is going to marry Harry,” one of her friends told The Telegraph.

“Harry never stops talking about marriage and children, and she has now got used to the idea. The wedding is likely to take place next year.”

In fact on Prince Harry’s recent trip to Australia last week, when asked outright about his plans for marriage he didn’t bother denying it but reportedly just laughed and moved on.

It’s no secret that Cressida is a bit of a free spirit, but she seems to have tamed the party-loving Prince, who was reportedly smitten as soon as he was introduced to her by his cousin Princess Eugenie.

At the moment the pair are said to be enjoying the calm before the storm, as they know they will be under intense scrutiny as soon as the big announcement is made.

A source told E! News: “They want to remain very much as they are—with a private life away from the cameras.”

“For now they want to enjoy as much time together before the seriousness of their relationship becomes public with announcements.”

“[They] basically live with each other these days and are rarely out of each other's sights," the insider revealed.

“This is it for them both. He hasn't proposed yet, but it's only a matter of time.”

Do you think Cressida is the right woman for Harry? Tweet us @SofeminineUK! 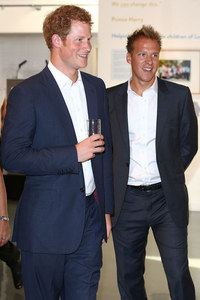