Kelly Osbourne has rejected Lady Gaga’s peace offering of a birthday cake by taking to Twitter and Instagram to mock the gesture. Kelly, who tweeted: “Not to be ungrateful but why would you send me a birthday cake via my MOTHER in a country half the world away? #JustSendItToME #LoveNotWar,” has been in a feud with the Telephone singer since she accused her of hiding a pregnancy, and received a torrent of abuse in return from Lady Gaga’s fans.

Kelly Osbourne has given Lady Gaga the cyber middle finger after criticising Lady Gaga’s offer of birthday cake – and peace – by taking to Twitter and Instagram to rather ungratefully slate the singer.

The Fashion Police star, who has been at war with Lady Gaga ever since she suggested Gaga was hiding a pregnancy at the 2012 Grammys, tweeted several times about the birthday cake.

She wrote: “Not to be ungrateful but why would you send me a birthday cake via my MOTHER in a country half a world away? #JustSendItToMe #LoveNotWar”, “#StefaniStopIt!” and “I like desert, but I prefer the truth… it’s sweeter.”

The tweets were sent not long after Lady Gaga and Kelly’s mother, X Factor judge Sharon, made amends during Sunday night’s show.

During the Gaga/Kelly feud, Sharon was firmly on the side of her daughter, going as far as to write an open letter criticising the Paparazzi singer, however she was more than happy to put it behind them.

Sharon was seen delightedly applauding Gaga’s raunchy performance and the couple shared a hug at the end.

A source told the Metro: “Sharon and Gaga spent time together backstage. They sat talking for a while. They were happy to share the space before having a private conversation. They are both amazing women and both about ‘love’ at the end of the day. There were no hard feelings.”

However Kelly clearly doesn’t feel the same, as she also instagrammed a photo of the birthday cake from Gaga with the hashtags “Eat my s**t” and “Hypocrisy.”

Not to be ungrateful but why would you send me a birthday cake via my MOTHER in a country half the would away? #JustSendItToME #LoveNotWar

Lady Gaga took the high road and tweeted Kelly a picture of her with Sharon, writing: “I didn’t know it was your B-Day until this afternoon. Meant as a peace offering. Happy Birthday.”

Lady Gaga also intervened when her infamous fans, the little monsters, began to send Kelly torrents of abuse, tweeting: “Monsters, please just focus on the positive of tonight’s performance and do not send any hateful messages. I don’t support it. #SpreadLove.”

Monsters, please just focus on the positive of tonight's performance and do not send any hateful messages. I don't support it. #SpreadLove

Despite her daughter clearly fuming over the whole thing, Sharon appeared to support Gaga and tweeted: “Blown away by Lady Gaga’s performance and graciousness.”

Do you think Kelly is being too harsh? Tweet us @SofeminineUK 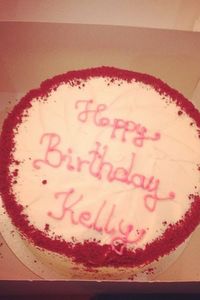