SPOILERS AHEAD! So it looks like we’re all sobbing over Game of Thrones again. But this time, these aren’t tears of sadness. These are tears ecstatic, triumphant bliss because hey, we always get choked up at weddings (LOL). Other stuff happened too, of course, so let’s go through the episode knowing how it concludes with a smile on our face and a song in our heart...

As per usual, the ‘Previously’ section took up half of the episode. There’s a lot of ground to cover with the show’s 2 zillion characters...

The show opens on Ramsay Snow hunting (remember? The one who chopped off Theon’s dick? Sweet memories). Rather than a boar or, you know, deer or something, Ramsay is chasing down what we gathered was some sort of ex-girlfriend? His new gf shot her in the leg, then the pair let dogs tear to shreds.

It seems pointless to mention how disgusting this is, because let’s face it, GoT has definitely done worse. However, poor old Theon, who shall henceforth be known as Reek, is watching on and he’s obviously gone a bit cray. We know he was really not cool in season 2, but can’t bygones by bygones? We don’t like seeing Th-Reek in this sorry state!

We move on to Tyrion and Jaime having some bro time, and it’s clear that the good old Kingslayer is having some serious problems with his new hand. If he can’t use it to sword fight, what good is he in the Kingsguard?

Cue some much needed time with Bronn teaching Jaime how to fight with his left hand. When questioned if the area he has chosen is safe, Bronn replies: “There’s this knight…right here is where I f*** his wife…if they didn’t hear her, they won’t hear us.”

We go back to those nasty ole’ Boltons, as Roose has finally returned to see his bastard son’s handy work on Theon, and is less than impressed. They could have used him for a hostage back in the days he had a weiner for crying out loud!

There’s obviously some tension between father and son, but we were more concerned about how utterly defenceless Theon has become. Those tears when he found out Robb was dead. *Sniff*

Back in King’s Landing, Shae is becoming an increasing problem (ugh, Shae). Varys knows that she has been discovered and could be hanged, which looks more likely when Cersei points her out to Tywin over dinner. Tyrion needs to get her out, and he needs to do it now.

Joffrey seems to be unusually decent for about 5 seconds, but things soon go back to normal when he gets his pretty new sword and slices Tyrion and Sansa’s wedding gift to shreds.

Back to Shae, Tyrion basically says everything he can to get rid of her before she becomes Lannister collateral damage, and it looks like she’s safely on a ship out of there. Yay, bye Shae!

In Dragonstone, the Red Priestess seems to be sacrificing the King’s family members since they still worshipped the seven gods. Poor old Davos is still sucked into all this rubbish.

Melisandre also has a word with Stannis’s daughter, Shireen. She was so sassy. Yeah yeah yeah let's get back to the storylines we care about! 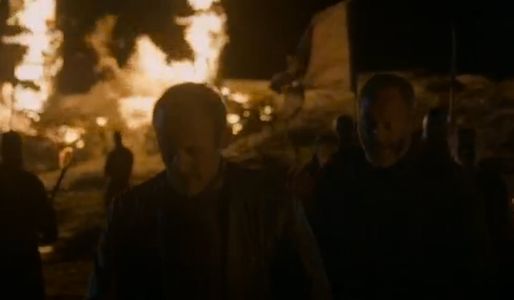 Bran is getting some serious teenage angst north of the Wall, preferring to live inside his wolf than face reality as a cripple. A little later he touches a Heart Tree and sees all sorts of things – the three eyed crow, undead horses, the Iron Throne, Ned, a shadow of the dragons etc…seriously what is going on with him? Is he magic now?

Back in King’s Landing, Joffrey and Margaery are getting married. ...Yay.

“Killing a man at a wedding? Horrid. What sort of monster would do such a thing? As if men need more reasons to fear marriage.” Can Lady Olenna be in everything, ever, please?

Jaime and Cersei swiftly target those who threaten their twincest relationship. Jaime tells Loras his sister will murder him and his children. Lovely. Meanwhile, Cersei asks Brienne if she loves Jaime.

Can we just mention how exciting this moment was by the way? Brienne didn’t answer when Cersei asked if she loves Jaime! Does Brienne love Jaime?! Can this possibly become a thing?

“People everywhere have their differences. In some places the high born frown upon those of low birth, in other places the rape and murder of women and children is considered distasteful.” Oh Oberyn. Yes. 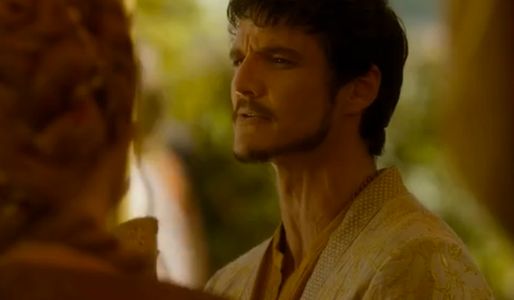 Joffrey then went to wind up his uncle as much as humanly possible by recreating the War of the Five Kings with dwarves. Of course, Loras, Margaery and Sansa got pretty riled watching their lover/husband/brother’s horrible deaths re-enacted in front of them. As if you need more proof that Joffrey is the absolute worse. Oh wait. Apparently you do.

Joffrey forces Tyrion to act as his cupbearer whilst pouring wine over his head and generally being terrible. Can we just note how sweet it was that Sansa went to get the goblet that Joffrey kicked away?

Fortunately the arrival of the pie interrupted terrorising Tyrion hour, leading up to probably one of the grossest yet most satisfying moments of Game of Thrones so far…

A pie! Tyrion and Sansa try and fail to leave the festivities as it’s served up, with Joffrey munching it down like he hasn’t eaten in weeks. Yes. Eat it Joffrey, eat it all!

That first cough. Did anyone suspect? Did anyone lean out of their seats in a moment of “surely George RR Martin hasn’t actually done something to make up happy” disbelief?

HE DID! GEORGE DID IT! Joffrey's out of there! During the chaos Sansa snuck away with Dontos the fool.

As a result, she​ misses THIS:

The only downside? What’s going to happen to Tyrion now we wonder? This does NOT look good!

Still, as Anna Kendrick put it:

Just watched Game of Thrones and now I'm in a GREAT mood. Who wants shots?!?!?

Some questions, if you please:


Do you think Brienne loves Jaime?

What was the colour scheme of your celebration party?