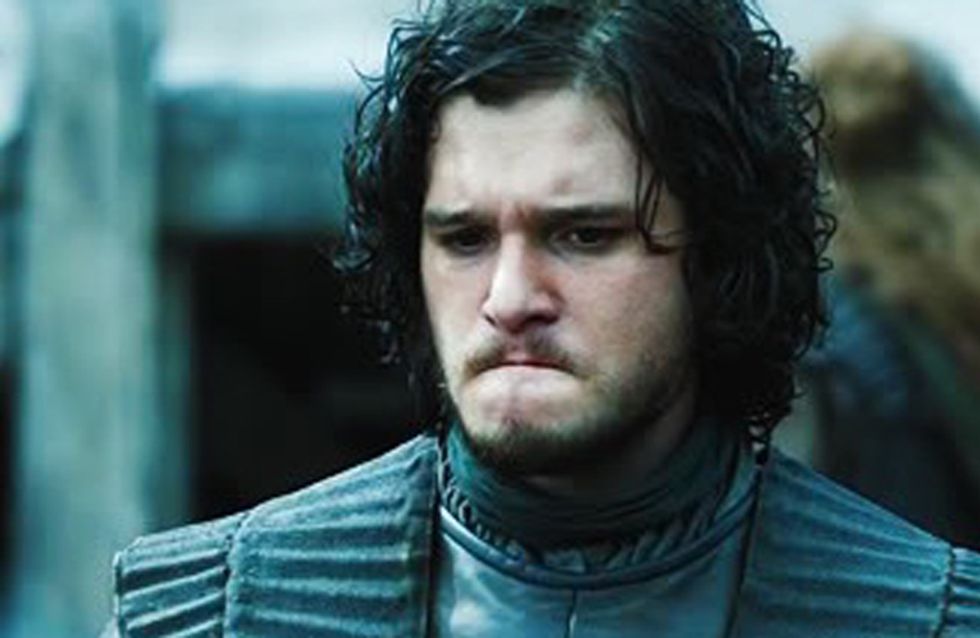 Because it’s hard to keep track of deaths in Westeros.

Remember this crucial piece of advice back in season one?

Unfortunately many characters did not learn sword fighting from the First Sword of Braavos, had no idea what to say to the God of Death, and died.

Just for a quick recap (and because we enjoy making ourselves miserable), here are the characters who have died between seasons one and four.

THE SEED IS STRONG.

This one was just horrible. We love you forever Drogo!

A crown for a King!

Straight through the eye. We liked Jory as well!

Are we ever going to forget the line that made us hate Joffrey and distrust this show for life?

"Ser Ilyn! Bring me his head!"

That's what happens when you go against your brother who is teamed up with a Priestess who gives birth to smoke babies, just saying.

Whilst saving Gendry. What a babe.

"Gods help you Theon Greyjoy. Now you are truly lost."

Click on the picture to see the kind of weird deleted scene death...

"Death by fire is the purest death."

UGH. THEON YOU RUIN EVERYTHING.

This was noble. Thanks Qhorin, we should have cared more when you died.

This one REALLY gave us the chills.

Also quick shout out to all of Robert Baratheon’s bastards (apart from Gendry). Those were some sad times.

Then Karl drinks from his skull. DARK.

Can't talk about this.

Can't talk about THIS.

"The Lannisters send their regards."

We hated that wedding.

That's what happens when you slag off Daenerys in her mother tongue, bitch.

Don't go against the King in the North!

No one really cared about Ros, but this was a tad sadistic.

Warg your way out of this one!

We will never, ever get over this one. Damn it Oberyn, you'd WON.

As if Jon's life needed to get worse.

He's still alive in the books! What is happening?!

The Hound – Battle with Brienne of Tarth

Well, we assume so anyway. Arya left him severely wounded, so "unless there's a Maester hiding behind that rock..."

To be fair Tywin, he did warn you about saying the word 'whore'.

Hodor for the Throne!

"I have only loved one woman. Only one, my entire life. Your sister" BOOM. Flysa Arryn. Hehehe.

Damn this was sad.

This was so sad, but awesome.

Rather a cannibalistic wilding than Jon!

So that's it! Obviously there's a few hundred foot soldiers to add to this list, but who do you think we'll be adding in season 5? Tweet us your theories of who will die in season 5 @sofeminineUK!

Fancy having your very own book to commiserate the deaths of these fictional loved (and hated) ones? Check out the Game of Thrones In Memoriam book!