Alright everyone, where were we?! Game of Thrones season 5 is just DAYS away so if you're having trouble recalling where everyone was at by the end of season 4, or you’re just being forced to watch it for the first time by your rabid fangirl of a boyfriend/friend/next door neighbour, here’s the ultimate catch up! Trust us, if the ‘previously on Game of Thrones’ segment was going give you this much info, it would take HOURS.

The story in a nutshell

The story takes place in the fantasy world of Westeros, with a bunch of different people wanting to take the Iron Throne for themselves. Plenty have died trying between seasons 1-4, most of whom we really, really liked. Game of Thrones spares NO ONE. We should probably focus on the characters who are still alive though...

Young Bran Stark has been crippled ever since Jaime Lannister pushed him out of a window in season one (thanks Obama). He has the power to warg (can go into the minds of animals) and has finally found ‘the three eyed raven’ beyond the Wall who can teach him more about his power.

We shouldn't worry too much about Bran's story; he’s not going to be in season 5 as his story has more-or-less reached the end of the book series and the other storylines need to catch up. See you season six Bran!

Jon Snow is the bastard son of the deceased babe Ned Stark (#TheNorthRemembers). He is part of the Nights Watch, a small group of men sworn to protect the realm against everything beyond The Wall (a really, really, REALLY f*** off massive Wall made of ice that keeps everything potentially bad out of the Realm).

Thing is, the population beyond the Wall known as a Wildings have bandied together to get past the Nights Watch and into Westeros in order to escape the White Walkers. White Walkers are unstoppable ice zombies that are going to destroy everything and everyone, just FYI.

This is why Stannis Baratheon, debatably the rightful King of Westeros, rides to The Wall, totally shuts down the Wildling army and takes the King beyond the Wall captive. This is why they call him Stannis the mannis.

Roose Bolton has become Warden of the North and has legitimised his bastard son Ramsay, who is so sadistic he would have put Joffrey to shame. Ramsay continues to torture Theon Greyjoy, now known only as Reek. We continue to feel kind of sorry for Theon although we know he doesn't deserve our sympathy.

Sansa Stark escaped King's Landing and is now using her womanly charm to manipulate Littlefinger, who basically started the whole series of grisly events in the first place and is a total d*ck but totally watchable.

Twins Cersei and Jamie Lannister’s bastard son Tommen sits on The Iron Throne after his sadistic older brother Joffrey was poisoned. He is now to be wed to Margaery Tyrell, who will go above and beyond to be THE Queen and is basically awesome at playing the game.

Tyrion Lannister (also known as everyone’s favourite character) has escaped King’s Landing after being found guilty for Joffrey’s murder (though innocent) and kills his father Tywin and his lover Shae on the way out. Varys, a cheeky bald eunuch who also plays the game of thrones like a champ, decides to leave with him. 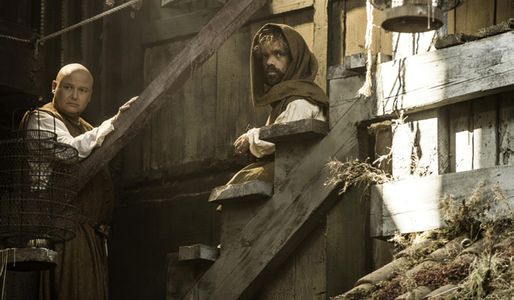 Arya Stark sailed to Braavos at the end of season 5. Since escaping King’s Landing after her father’s execution in season one, she’s trudged through several fields, escaped a couple of tricky situations and arrived at ‘safe’ situations just a few moments too late several times. She evades the help of Brienne of Tarth (a total badass), to take care of herself, leaving her captor/protector The Hound to die in a field (sniff).

Her journey from tomboy to properly psychopathic killer has NEVER boring to watch. Valar Morghulis Arya.

Daenerys Targaryen isn’t having the best time. Although ruling over several cities more or less successfully, her most trusted advisor Ser Jorah (also known as Lord of the Friendzone) was revealed to have betrayed her WAY back in season one, and has been banished.

Meanwhile, her three dragons have quickly become impossible to control, and Daenerys chains two of them up after one kills a little girl from the city. The third, however, is still on the loose…